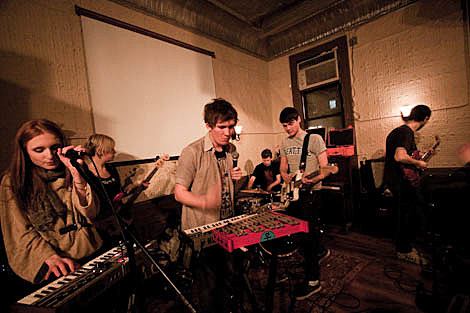 After "Anonymous" posted "soundfix closing at the end of FEB???? true or rumor??" in the comments yesterday, I investigated, and sadly one person that would know did get back to me with a simple "True". Free Williamsburg called Sound Fix "and they confirmed that they were indeed shutting down, 'just the bar,'"

This sucks for the free shows, and this is especially unfortunate for comedy. As we were just pointing out, Sound Fix has filled the gap left after Rififi closed. The Williamsburg bar has in fact become one of NYC's most consistent weekly (free) comedy show locations. The comic's comic writes...

If it seems like only a year ago that live comedy shows were beginning to find a new happy home behind the Sound Fix record store, that's because it was only a year ago, as Max Silvestri started hosting shows then and I was pitching the venue as a potential full-on replacement for the East Village's Rififi, which closed last summer, in part, because that club's owner gave up a similar battle with the neighbors. Gabe & Jenny joined up with Max for weekly Big Terrific shows that have lived up to the name, and other shows soon followed suit, making for lively lineups and large audiences just about every weeknight.

As we've pointed out many times, Sound Fix has been battling neighbors and the city over noise and other violations practically since they expanded into being more than just a record store. At least the record store isn't also leaving with them.

In the meantime, go check out a show at the venue during its final days. A few of them are listed below...