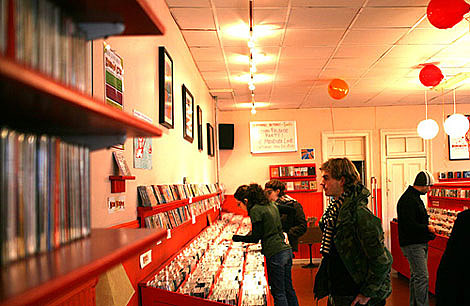 Five years ago, Sound Fix opened its doors with the aim of creating a new kind of record store, one that combined the finest in independent retail with food and drink and live music. The opening-night act in its adjoining bar were the Mountain Goats. Over the years, Sound Fix has hosted some of the biggest names in independent music, from Will Oldham to Beirut to Jens Lekman to the Sea and Cake and countless other acts. During that time, while record shops all over the nation big and small have closed their doors, Sound Fix has flourished, proving that the right kind of record store could still thrive in today's environment.

After five wonderful years on Bedford Ave., Sound Fix is packing up and moving to a new location - but not very far. In fact, only one block away, to the corner of Berry and N. 11th St. The new location, a beautifully renovated 90-year-old factory at 44 Berry Street, seeks to build on the store's success by offering more than ever - more titles in more formats, from CDs to vinyl to 7-inches to books to DVDs.

Together, with Beacon's Closet and Brooklyn Brewery and Brooklyn Bowl, this stretch of N. 11th promises to be one of Williamburg's more popular blocks. The store intends to continue its in-store tradition, but the days of selling booze and coffee and bagels are over. With several neighbors at 44 Berry offering those services, Sound Fix can focus on selling music.

The date for the reopening has not been established yet, but we are seeking to open sometime in September. Another press release will go out when the opening date has been determined.