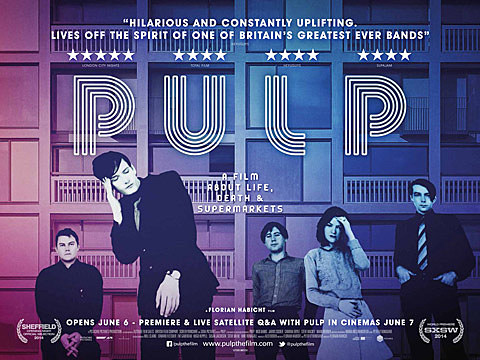 Lincoln Center's Sound + Vision film series is back for its second year, happening July 31 - August 6. The weeklong series kicks off on July 31 with a screening of shoegaze documentary Beautiful Noise that was funded by a Kickstarter campaign (trailer below). The series ends on August 6 with a screening of Pulp: a Film about Life, Death & Supermarkets. That screening features a Q&A with director Florian Habicht and a live performance by Dragons of Zynth. In between, there's a screening of Talking Heads' Stop Making Sense on 8/1 with a Q&A with David Byrne ;, as well as documentaries on Rodrigo y Gabriela, Brasslands, Japanese didgeridoo player GOMA (shot in 3-D), and more. Tickets for Sound + Vision go on sale Thursday (7/10) and the full schedule is below with more info about the films here.

The night after the Pulp documentary screens at Lincoln Center, it will be shown as part of Rooftop Films at Industry City in Sunset Park (8/7). Habicht will be there for a pre-screening Q&A as will Pulp frontman Jarvis Cocker which is probably worth the price of admission on its own. Tickets are on sale now.

Conceived by Cocker and directed by Habicht, Pulp: a Film about Life, Death & Supermarkets chronicles the iconic Britpop band's "final" hometown show at Sheffield's Motorpoint Arena in December 2012. (They played the Coachella cruise after.) It's as much about Sheffield as it is Pulp, interviewing fans and locals on the leadup to the concert. You don't have to be familiar with Pulp's music to enjoy this one, but it certainly helps like in scenes where a group of septuagenarians sing Pulp's 1997 single "Help the Aged." It's a terrifically entertaining film and its trailer is below.