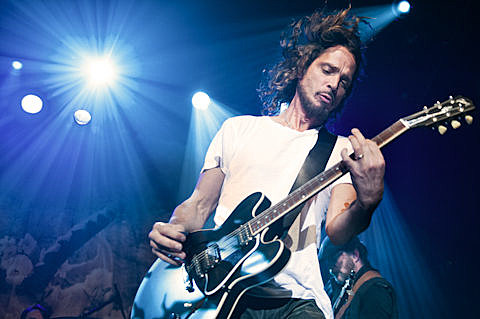 The reunited Soundgarden have been having a hell of a year (at least in NYC). They performed a Live on Letterman concert in November and later that same night joined frontman Chris Cornell at his solo show at Bowery Ballroom for a few Soundgarden cuts. Then they played three intimate North American shows including a sold out Irving Plaza show. Around that same time, they announced a 2013 tour which will bring them back to NYC on January 22 and 23 at Hammerstein Ballroom. Those shows are sold out, but if you missed out on getting tickets, you'll have a THIRD chance to see the band in NYC this January when they play an American Express Concert Series presented show at Terminal 5 on January 16.

Tickets for the Terminal 5 show go on Soundgarden Fan Club presale today (12/7) at noon with a general on-sale starting Monday (12/10). "Event is open to American Express Cardmembers who have enrolled their synced American Express Card and Tweeted the offer hashtag. To sync your Card, visit sync.americanexpress.com/Twitter. Terms apply, Reg. Ltd."

A list of updated dates and a recent video, below.

Soundgarden - "Been Away Too Long" Official Video