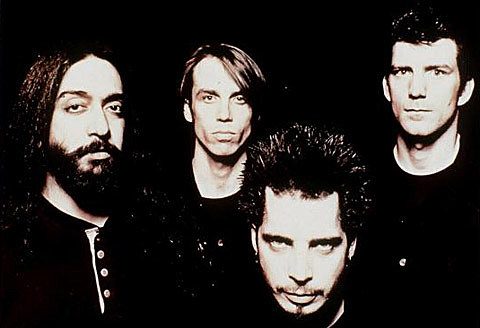 Over the past few months, we've been busy jamming, writing and hanging out together - exploring the creative aspect of being Soundgarden. It feels great. We have some cool new songs that we are going to record very soon. Thank you for all of the support!

Until we hear that new material, we'll have to either settle for Live on I-5 (a new live album recorded in 1996) or catch Soundgarden on the road this summer! The reunited Seattle band will hit the road for select North American dates with support from Coheed & Cambria on some dates and The Mars Volta on others.

Coheed & Cambria (who is also scheduled to play a free show at Williamsburg Waterfront) will join Soundgarden at both NYC-area dates, July 8th at Prudential Center in Neark and July 9th at Nikon at Jones Beach Theatre in Wantagh, NY. Tickets for Prudential Center and Jones beach go on Fan Presale at 9AM and 7AM PDT (aka noon and 10AM EST) respectively, while regular sale for both Prudential Center and Jones Beach kicks off at 10AM on 5/13. They also play Mohegan Sun in CT on July 6th and the Borgata in Atlantic City on July 14th. All dates are listed below.

The Mars Volta play the Atlantic City date, but neither of the NYC-area shows, so maybe they'll announce their own NYC show soon? Omar and Cedric last played NYC together in March.

In related news, Kim Thayil of Soundgarden recently contributed guitar to the new record by A Storm of Light, As The Valley of Death Becomes Us, Our Silver Memories Fade. Check out that track/a recent interview with Josh Graham.

All tour dates, some with Queens of the Stone Age and Meat Puppets too, are listed below...