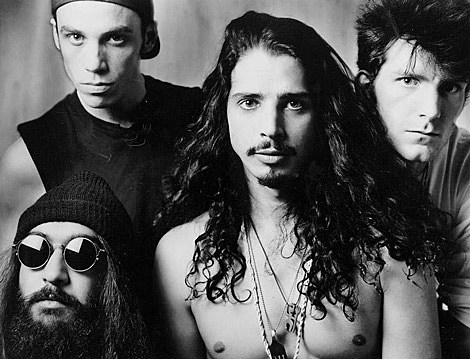 The 12 year break is over & school is back in session. Sign up now. Knights of the Soundtable ride again! www.soundgardenworld.com - [Chris Cornell]

After twelve years of attempts at Top 40, complete with collaborations with Timbaland, Chris Cornell has followed the lead of his former bandmates in Audioslave (I still can't believe that is an actual band name) and returned to the great Soundgarden.

Since the breakup, the rest of Soundgarden has kept busy as well, with Kim Thayil collaborating with Ascend, Jello Biafra, and sunn O))), Ben Shepard collaborating with Josh Homme and Mark Lanegan, and Matt Cameron serving as Pearl Jam's drummer. In March, the three joined Tad Doyle (of Tad) on stage in Seattle at a show for The Nightwatchman (Tom Morello). They performed Soundgarden material. Dig on video from that show, as well as a gang of Soundgarden vids, below...

Tad-garden on March 24, 2009 at Seattle's Crocodile Cafe "Hunted Down"

Soundgarden - "Hands All Over"