Soundgarden in Atlantic City in 2011 (more by Dana (distortion) Yavin) 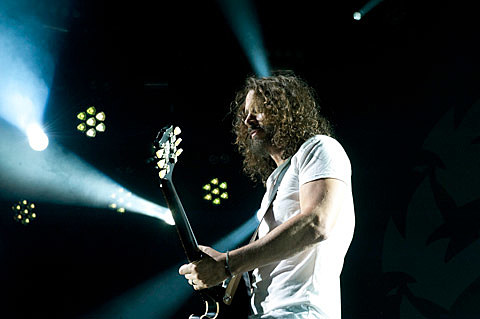 As mentioned, Soundgarden are playing three intimate North American shows this year, including one in NYC on November 13 at Irving Plaza. Presale tickets for that show go on sale today (11/8) at noon. You need a password (we think it might be "SPOONMAN"). General on-sale starts Friday (11/9) at noon.

The day before that show, Soundgarden will perform for 'Live on Letterman' at Ed Sullivan Theater (11/12) at 8 PM. That performance, which is about 45 minutes long as opposed to the one or two songs they'll perform on The Late Show with David Letterman that same night, will air live on CBS.com and VEVO. We're also giving away two pair of tickets to attend the show. More details on that below.

Soundgarden will release King Animal on November 13, but you can stream the entire thing now ahead of its release date on iTunes. The band also performed on Later... with Jools Holland on Tuesday (11/6). They played King Animal single "Been Away Too Long," plus the old favorite, "Rusty Cage." You can watch videos of both performances below.

Soundgarden - "Been Away Too Long" on 'Jools Holland'

======================
For a chance at winning tickets to see Soundgarden Live on Letterman at Ed Sullivan Theater on Monday (11/12): either tweet something that includes both @BrooklynVegan AND "SOUNDGARDEN" in the tweet, or send an email to BVCONTESTS@HOTMAIL.COM with the subject line "SOUNDGARDEN". Include your first and last name in the email. We'll pick a winner at random and contact them with more details. If you enter by email, it will not be shared with anyone else. Good luck!
======================