Soupcans at Bowery Ballroom in April (more by Dylan Johnson) 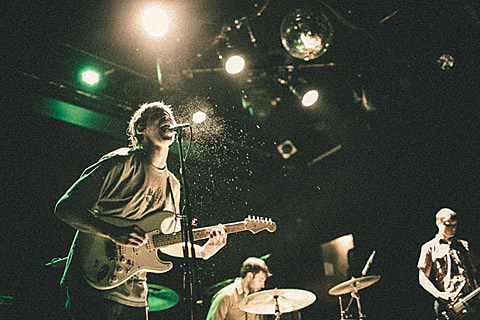 Toronto noise punks The Soupcans, who we caught in NYC when they played with their hometown buddies METZ and Odonis Odonis, released the dark 'n' dirty Parasite Brain EP earlier this month. It takes the sarcasm, anger, and weirdness that began filtering into post-hardcore via late period Black Flag and The Jesus Lizard, but while those bands could slow it down, The Soupcans (minus the sludgy "Crimes Of The Future, Pt. II") speed it back up to hardcore's early days, cranking out the 6-song EP in 10 minutes. Listen in full below.

The Soupcans are currently in the midst of some US and Canadian shows, and they'll be back in NYC to play Cake Shop on December 6 with Fins, bbigpigg and Desert Sharks; and Death by Audio on December 7 with Estrogen Highs and Chat Logs. No advance tickets for either show. All dates are listed below.

Connecticut's Fins, who open the Cake Shop show, make messy sounding post-hardcore, which you can hear on their new self titled EP that they recorded with The Men's Ben Greenberg. The whole thing is streaming, along with the Soupcans EP stream and list of dates, below...