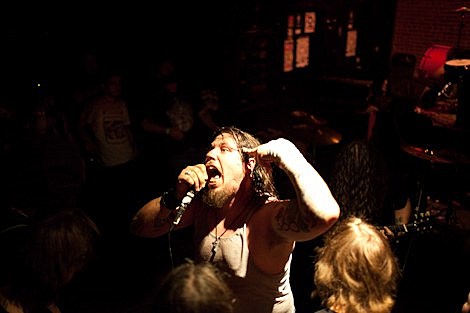 North Carolina's Sourvein will team up with Hull to take on The Acheron on August 27th. The all-ages jam will run you $10 and the festivities will kick off at 8PM. The show is one of a pair of shows lined up in the coming months for Hull; the band will also play THIS FRIDAY with Black Tusk, Zoroaster, and Dark Castle at The Studio at Webster Hall (tickets).

Florida's Khann will team up with Mockingbird, Before The Eyewall, and Divider for an all ages show at Acheron on August 24th. $10 gets you in the door. Khann are prepping their new LP, Erode, due on Black Market Activities later this year. The band recorded the LP with Chris Owens (Lords) during a recent East Coast tour that saw them appear at Lit Lounge with Tiger Flowers.

Canadian folk-black metal combo Woods of Ypres will hit the road for a short tour next week, tagging NYC on July at Bowery Electric with Vektor, Martyrd, and Fin'Amor. For the unaware, Woods of Ypres features the Madden brothers (bass, drums) of Woe amongst their ranks, and recently completed a tour diary for Decibel magazine.

Speaking of Bowery Electric, I have a pair of tickets available for giveaway for tonight's (7/6) Nominon / Evoken show. Details on how to win, as well as a gang of tour dates and some video, are at the bottom of this post...