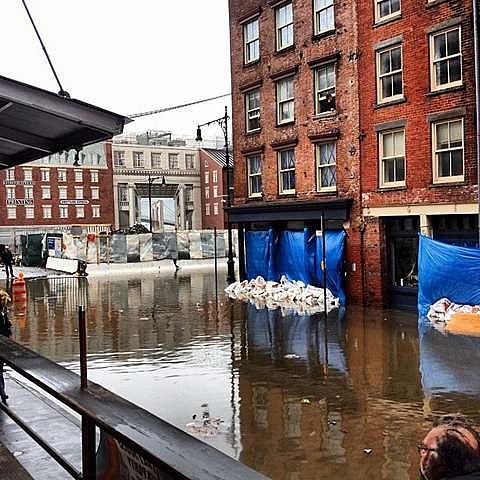 Lower Manhattan got it pretty good by Sandy, South Street Seaport included. The area was under multiple feet of water. The Seaport Music Festival, who put on the free shows down there, still had their stage set up. Some gear was ruined though they luckily had taken down the deck, lights, tent and canopy in preparation for the hurricane. No word on how the Beekman Beer Garden fared, though one Tweeter fears it is "definitely gone". Wine store Pasanella and Son was reportedly "decimated". Sadly, there has also been some looting at the Seaport's shops.

At a press conference this afternoon, Mayor Bloomberg, who recently confirmed at least 18 Sandy related deaths in NYC, announced that like the subways (Buses start returning tonight [10/30]), it may be three or four more days before power is restored to the tons of residents who lost it due to Hurricane Sandy. This includes all of lower Manhattan where, as you know, a whole lot of Manhattan music venues are. Which probably means no shows till the weekend for Pianos, Cake Shop, The Living Room, Arlene's Grocery, Fontana's, Rockwood Music Hall, The Slipper Room, Mercury Lounge, Bowery Ballroom, Santos Party House, Le Poisson Rouge and others.

Good news, apart from no power, the Ludlow St. area venues all came out ok, with folks at Pianos, Cake Shop and Arlene's Grocery specifically saying there was no water damage. Williamsburg clubs, are getting somewhat back to normal sooner, with shows at Union Pool and Glasslands tonight.

Elsewhere, Park Slope/Gowanus's Bell House reports that they "had some minimal flooding but will be back to business as usual by tomorrow. Working on fundraiser ideas for you now " Bar 4 in Park Slope lost their awning.