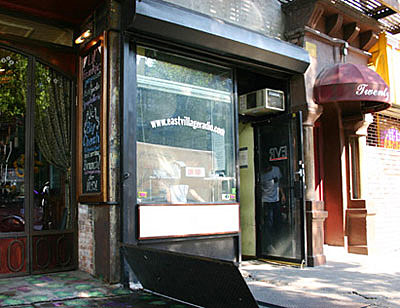 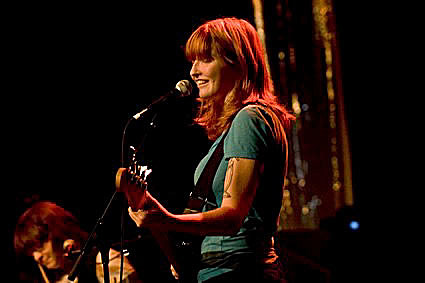 Hosted by the legendary KRS-One, acts slated to perform at the free festival include New York's own and/or adopted bands Awesome Color, Vivian Girls, High Places, Dr. Lonnie Smith, and The Hypnotic Brass Ensemble, plus L.A.-based Flying Lotus, Texas-based Devin the Dude, and Icelander Ólöf Arnalds, as well as a special appearance by John Oliver of The Daily Show.

For the festival, East Village Radio will run free shuttle bus service for fans between the station and the Seaport, from 12:30 p.m. to 7 p.m.

"East Village Radio provides NYC and it's listeners a cultural experience," says Morgan Lebus of Domino Records. "The Festival is a perfect extension of this. Excellent programming, programmed by people who know what's good."

In 2003, East Village chef, restaurateur and businessman Frank Prisinzano dedicated a small storefront adjacent to one of his restaurants, Lil' Frankie's, and turned a fledgling idea into East Village Radio. With its 24/7 programming, the station provides street-level entertainment for curious passers by and music fans, alike.

"After doing our own thing as a community-based radio station for five years now, we've decided to show our appreciation by hosting a free music and lifestyle festival for New Yorkers and our listeners, who reside literally throughout the world," says Prisinzano. "There's so much talent that passes through the tiny glass dj booth that is East Village Radio, we want more people to know about our ongoing commitment to providing music choices that they won't hear elsewhere, especially on commercial radio."

In addition to the diverse musical main course offered via the free day-long festival, the event will feature for purchase an exclusive menu of grilled foods and dishes created solely for the festival by Frank Catering. Prisinzano is the owner and executive chef of the business as well as three East Village restaurants: Frank, Supper, and Lil' Frankie's. Since opening Frank 10 years ago, Prisinzano has earned a reputation for plating high quality Italian fare at each of his establishments and for enhancing the East Village community.

"In celebrating the fifth anniversary of East Village Radio, I wanted to combine my two passions in life - terrific music and great food," says Prisinzano. "We're trying something a bit different -- to do something special that reflects who we are, while having some fun along the way."

In selecting the location of the festival, East Village Radio turned to one of its own -- DJ Pledge, aka Stephen Dima, who hosts Seaport Music Radio on East Village Radio. Dima, also, produces the acclaimed free indie-oriented Seaport Music series held each summer on Pier 17 at South Street Seaport. The popularity of the series among music fans has established the Seaport as a recognized, if not quirky, outdoor music venue. The alignment between East Village Radio and Seaport Music creates the opportunity to offer New Yorkers the first free post-Labor Day music festival in the city.

"East Village Radio thrives because of the grassroots nature and versatility of its programming, djs and listeners," according to Station Manager Steve Cohen. "Each week, we host more than 70 shows crafted by some of the most renowned, independent minds in music. Everyone associated with East Village Radio demonstrates an uncompromising passion for music."

The range of shows include: "Authentic Shit" with Mark Ronson, "Fat Beats Radio" with Monster and Bill Sharp (hip hop); "The Let Out" with The Fader Crew (hip hop, indie, electronic, rock); "Minimal-Electronick Plus" with Veronica (electro, synth, wave); "Guilty Pleasure" with DJ Elhaam (new music, indie, dance, Britpop, rock), "The Wax Poetics Record Rundown" with J. Kirby and Josh D (rare and not so rare grooves), "Other Music" with Other Music Djs(favorite new releases and reissues by the East Village record store staff) and "Domino Radio" with Domino DJs (label-centric and beyond), among others.

East Village Radio features more than 70, unique two-hour shows. Each offers distinctive programming incorporating a wide array of musical genres, news, comedy and/or thought-provoking commentary. The station provides a voice for local DJs and personalities and gives them access to a worldwide audience via on-demand live streaming, as well as downloadable podcasts of weekly audio archives. More information is available at www.EastVillageRadio.com.

Ólöf Arnalds
The Icelandic singer/songwriter and indie musician has been active within her native music scene for years as part of other bands. However, her solo debut Vid og Vidgarnered "Best Album of 2007" accolades from her country's top newspaper Morgunbladid -- beating out Björk, Sigur Rós, and Múm, among others, plus it earned "Best Alternative Album of 2007" at the Icelandic Music Awards. Her voice, melodies and lyrics evoke comparisons to Joanna Newsom.

Awesome Color
The Bushwick-based band delivers "rocket-fueled blast of energy and brains -- with songs and sounds that will blow you away," in the spirit of The Stooges. The band is comprised of singer/guitarist Derek Stanton, bassist Michael Troutman and drummer Allison Busch. (http://www.myspace.com/awesomecolor)

Devin the Dude
The Texas rapper has been a guilty pleasure of hip-hop since he and his Odd Squad hit the scene in the early 90's. Known for his homegrown blend of the lighter side of reality, he earned the nickname the "Richard Pryor of Hip-hop." Laugh's and thought provoking dialogue are a mainstay of his fourth studio release, Waiting To Inhale, courtesy of Rap-A-Lot Records. (http://www.myspace.com/devinthedude)

Flying Lotus
The latest Warp Records release from Flying Lotus (Steven Ellison) shares a title with his hometown, Los Angeles. He is described by XLR8R as "our favorite sculptor of hazy, spacey laptop beats, (and) no stranger to the comforting bleeps and bloops of the Nintendo generation." His music is featured in many of the segues of Cartoon Network's Adult Swim. His music draws from jazz, electronic and Brazilian influences. (http://www.myspace.com/flyinglotus)

High Places
The Brooklyn duo of Mary Pearson and Robert Barber combine Hawaiian, hardcore and Chinese pop with a bit of trance to create their other-worldly music. The pair shares a stage with Ponytail during a national touring this fall. (http://www.myspace.com/hellohighplaces)

The Hypnotic Brass Ensemble
Judging solely from the instrumentation of the band, many may be tempted to look to the New Orleans's famous brass-band tradition as the group's inspiration. In fact the musical lineage of the Hypnotic's members stems from the rich, progressive jazz scene cultivated in Chicago during the 1960s and '70s. Formed in 1999, the band relocated to New York (Queens) in 2005 and embraces an collective approach to making music which infuses imaginative jazz arrangements with a hip-hop sensibility.
(http://www.myspace.com/hypnoticbusiness)

KRS-One
Perhaps the greatest MC to ever hold a mic, the legendary artist's latest album project Hip Hop Lives (produced by Marley Marl) is a testament to KRS's commitment to the preservation and transference of Hip Hop from one generation to another. In 2007, he was named the "I am Hip Hop Icon Award" by Black Entertainment Television (BET). KRS-One is slated to MC the East Village Radio Music Festival.
(http://www.myspace.com/templeofhiphop)

Dr. Lonnie Smith
AKA "the master of the Hammond B-3 organ," which he calls the "425 pound beast," Smith has furthered the sound of jazz organ, and created a worldwide fan-base during a five-decade career that has produced more than 70 albums. Once described as "an enigma wrapped in a turban" his unique styling and prolific output have elevated him to the status of living musical icon. (http://www.drlonniesmith.com)

Appearances by
John Oliver of The Daily Show