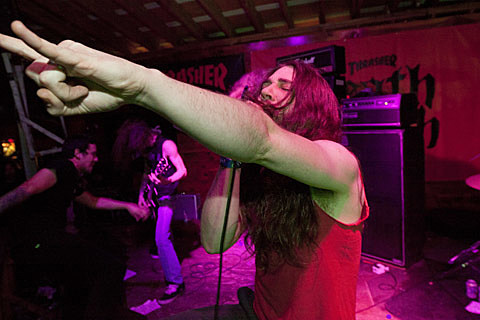 BrooklynVegan is proud to announce the NYC date of the MASSIVE Southern Lord Tour! The tour features appearances from the mighty Black Breath & Martyrdod on all dates, with rotating appearances from Poison Idea, The Secret, Burning Love, Enabler, Noothgrush, Pelican, Powertrip, Wild/Tribe, Dead in The Dirt, and All Pigs Must Die.

All dates are still TBA now announced and listed below. NYC's lineup will feature Black Breath & Martyrdod, along with The Secret, Burning Love, Enabler and one more band still TBA. It goes down on July 6th at Acheron and tickets are on sale.

Black Breath, who played the BV/Power of The Riff/Southern Lord SXSW showcase (along with Enabler), haven't played NYC since their headlining show at The Studio at Webster Hall. The band recently released Sentenced To Life via Southern Lord.

Martyrdod have never played the East Coast and are touring on the strength of their 2010 release Sekt. The band will release their next LP Paranoia with Southern Lord.

The Secret last played NYC at Union Pool after SXSW 2011, where they also played a BV day party at Emo's.

Burning Love a bunch other dates and an NYC show in the near future. They're headlining Acheron on 4/29. The band have the new Black Widow 7" on the way via No Idea.