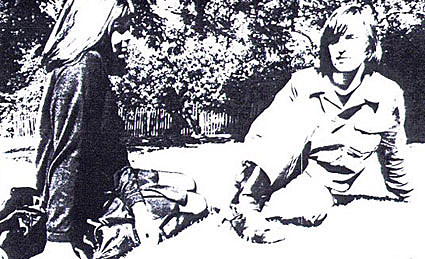 The Vaselines were a indie rock band from Bellshill, Scotland. Formed in 1986, the band was originally made up of only Eugene Kelly and Frances McKee, but later added James Seenan and Eugene's brother Charlie Kelly on bass and drums respectively from the band Secession.[1] McKee had formerly been a member of a band named The Pretty Flowers with Duglas T. Stewart, Norman Blake and Sean Dickson.

Nirvana frontman Kurt Cobain once described Kelly and McKee as his "most favorite songwriters in the whole world". [Wikipedia]

The Vaselines (first-ever US performance) (Saturday), Les Thugs (they're from France) (Sunday), and Eric's Trip (they broke up in '96) (Saturday) have been added to the Sub Pop 20th Anniversary Festival happening in (or maybe near) Seattle in July.

DeVotchka, Grand Ole Party, Thee Emergency, and Voyager One were added to the Capitol Hill Block Party - another two day festival happening in Seattle in July.