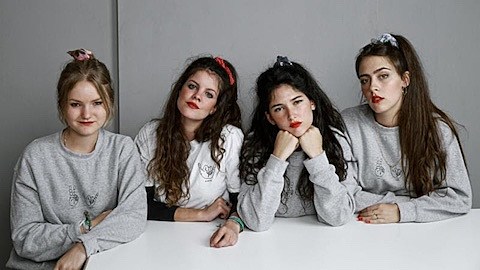 Madrid garage rock band Hinds' singers/guitarists Carlotta Cosials and Ana García Perrote initially started out as a duo in 2011. They eventually started recording, posting tracks like "Bamboo" and "Trippy Gum" under the name Deers which attracted international attention. They became a quartet in 2014, adding bassist Ade Martín and drummer Amber Grimbergen. Soon after, they were forced by Canadian band The Dears to change their name. They weathered that hurdle and haven't looked back. The opened for the Libertines in Paris (their 20th show ever) and Brussels, and spent most of 2015 on the road, including a lengthy North American tour with Public Access TV.

With their debut album, Leave Me Alone, about to be released in January, Hinds are not resting, and currently touring Europe. They did take time out to talk via Skype (the interview was translated from Spanish) about the new album, the current Madrid scene, dealing with sexism, opening for The Libertines, the decision to sing in English, and lots more.

BV: Hinds haven't been a band that long but have already accomplished a lot. How does all this feel?

Ana: It's very impressive because we've had fans from day one and when you've been together as a band for two years, it feels like they've been your fans all your life and they continue sharing positive comments like "I'm super proud that you've accomplished this!" and it's so encouraging for us that they give us so much support.

BV: You've also played a lot of shows with your friends from The Parrots and released a split single 7" on Burger with them, and made a video together too. Are you planning on working together in the future?

Ana: Diego, the guitarist and singer of The Parrots produced our album Leave Me Alone and we're together with the band till death. They're our close friends from Madrid and they've taught us a lot. We'll definitely release something with them again in the future.

BV:Most of your North American fans don't know much about the indie music scene in Spain and in Madrid. Can you tell me a bit about it?

Ana: Well, it's a very small scene. I mean, we thought it was bigger but then we realized that...

Amber: Little by little, more groups have come out, but since we barely spend time in Madrid then we don't find out much about what's happening in the current music scene there.

Ana: Yeah, there are more bands now. That's the good thing. In 2009, when we started going to concerts and stuff, we realized that there was a strong scene but it was mostly the same five groups that would play in local bars every weekend. Now there are more bands surging up and because people are listening to more garage rock now and more groups are coming together.

BV: Do these bands play in Spanish or are there more now that are starting to sing in English?

Ana: Now there are.

Ana: The new bands are starting to sing in English.

BV: That's good. The Spanish bands I grew up listening to in Puerto Rico typically sang in English so I'm glad that more are breaking out of the Spanish bubble.

Ana: In a bunch of Spanish interviews, they ask us why we sing in English if we're Spanish and we have to explain to them why. Some of them even get offended because we sing in English. It's like, fuck, "It's our language, are you ashamed of it or what?" but it's a simple matter of logic. If more people can understand what we sing about, more people can enjoy our music.

BV: As a band, you seem to have strong English and North American influences.

Ana: Yeah, it's more American than English, honestly. The bands we listen to are more from the States than England, but there are many English bands that we like as well.

BV: You also had the opportunity to open for The Libertines in Paris and Brussels.

Ana: Well, yes, we played with The Libertines during our twentieth concert in a stadium of around 6,000 people, it's crazy.

BV: How was that experience for you?

Carlotta: It was very exciting, but on a pragmatic level, it didn't change much for us as a band because the people there were such fans of The Libertines that when we were playing, they were very emotional and practically didn't pay attention to us; they just wanted us to be done so they could see The Libertines play, because they had been waiting for that show for years. For us, it was an incredible experience, you know, playing in such a large venue with such a large audience.

BV: When you're on tour, are there any challenges that have come along with accomplishing your dream of touring the world?

Ana: And sell merchandise, then meet the people who want to take pictures, so you have to smile in all the photos and then try to sleep in a hotel.

Carlotta: Each day we have to not lose the perspective that each day is important, you know?

BV: Which bands did you grow up listening to that you consider to be an influence in the band?

Carlotta: It depends... we each have a dark past, I think, no?

BV: When you started to listen to bands that made you realize that you wanted to do that yourselves and played some sort of role in your lives as musicians.

Ana: Hmmm... I think the first one was Arctic Monkeys.

Amber: Yeah, me too.

Ana: Before listening to them, we were all into older music like Velvet Underground and Bob Dylan, but it's so old that you don't feel...

Carlotta: You can't connect with it as easily.

Ade: You can't really go see them in concert and have that experience.

Ana: Of course, with Arctic Monkeys, that was the first time I saw a band that I liked perform-- oh, and The Strokes.

Carlotta: I also perfectly remember the first time that I listened to The Strokes. It was in the only bar that played alternative music in Madrid and I thought "My God, what is this? What type of music is this? What genre?" and now they're important.

BV: In your video interviews with FADER and NME, you mentioned that you experienced sexism as a band for the first time. How have you been able to deal with that?

Ana: On one hand it's shitty because it makes everything more difficult, but on the other hand it gives us more strength. Besides making the music we want to make, fighting to live life the way we want, and do what we want, we realize that we're changing the indie music world a bit simply due to being women and being onstage doing what we love and slowly accomplishing what we want. We feel like if people get more used to seeing girls like us doing this, then girls will see us and maybe will want to form their own bands or a guy will say "It's a girl onstage, that's so cool, I'm going to respect that now." Little by little, with our little grain of sand we can try to change this. It empowers us.

BV: Many of your songs follow your motto of "nuestras mierdas, nuestras reglas" (our shit, our rules) with a fun side, but you also delved into darker and sadder themes, which you had mentioned in other interviews that you hadn't easily been able to express. What is the process of writing those songs like?

Carlotta: It's not that we don't feel comfortable writing those songs or that it's not easy, but rather that we hadn't had the opportunity to write them. You write songs because you experience something and want to express what is happening. In the first four songs, they're more happy and everything. But then we're also human beings, I mean, we have a good time and we're positive and optimistic, but we also get sad sometimes. So then, sad songs come out, it's a natural process.

BV:Your song "San Diego," which you released recently, has a very upbeat sound yet you mentioned that the lyrics are about having bad nights and not wanting to sleep. Would you mind telling me a bit about the song?

Carlotta: Well... it would be like weeding out a work of art.

Ana: It's like revealing a magician's trick. I think that if you read the lyrics and go beyond the music...because the music is like very festive and happy. We like that double-edge in the song, you know, singing like everything is fine and nothing's wrong but you're actually singing about something that is very, very tough and sad, which happens to many people in relationships, so we'll leave that open to public interpretation.

BV: Now that you've accomplished your goal of finally releasing your first album, do you have any goals you'd like to accomplish as a band that you still haven't had the opportunity to do?

Carlotta: We just want the album to do well.

Ana: Yeah, right now it just has to do well. We spent so much time without a released album that right now thinking beyond that doesn't make much sense, you know? We're going to enjoy the album, try to make it all go well, that people like it, that they understand our message and the mission of rock and roll that we feel that we have. Then we're touring the whole year. We have until May all planned out and play practically everywhere in the world. We're also having a party to celebrate the release of the album in January, the 5th of January.

BV: Where is it going to be?

Carlotta: We don't know yet, but it's going to be great.