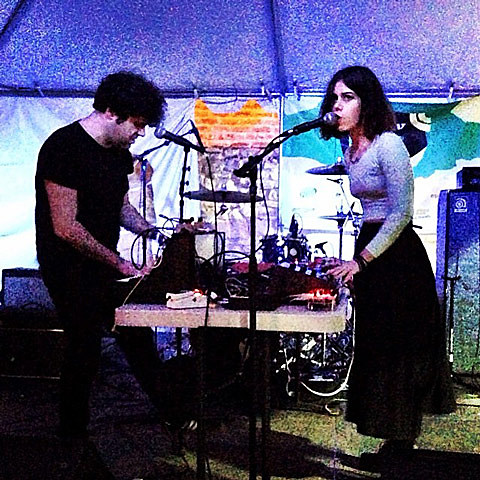 Mix the breathy vocals of late Broadcast vocalist Trish Keenan with the hyperactive analogue synthpop of "Electricity"-era OMD and that gets you pretty close to the sound of Spanish duo SVPER who last year released their debut album (when they were known as PEGASVS). You can stream the album below.

SVPER were one of our 50 Artists We're Excited to See at SXSW and I did manage to catch them on Thursday (3/13). Sergio Pérez (who's worked on El Guincho records) and singer Luciana Della Villa face each other across a table stacked with vintage analog keyboards and other gear and play loud as all get-out. I dug it.

NYC can catch SVPER next week, as they'll be here for three shows: Wednesday (3/26) at Cameo with Noia; Thursday (3/27) at Silent Barn with Palehound, Arm Candy and Blizzard Babies; and March 28 at NYU's King Juan Carlos Center as part of the Spain Fresh Fest (more info).

If you happen to be going to Barcelona for Primavera Sound 2014, you can catch SVPER there too (and new additions Future Islands, FKA twigs, and Girl Band). And if you need more Barcelona sounds, Univers are in NYC this weekend. Stream SVPER's album (and some remixes), below...