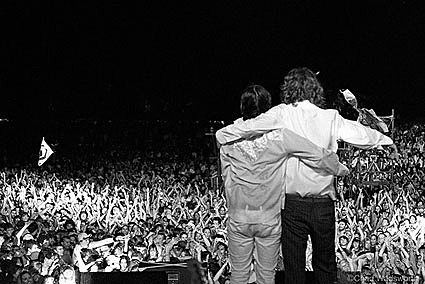 I couldn't believe it when Ghostland Observatory was headlining (and sold out) Bowery Ballroom, and I couldn't believe it even more when they were the biggest thing ever in the world at Austin City Limits this year - they headlined one of the stages (right before Bob Dylan played on another stage) on the last night of the festival, and you couldn't get within a mile of them - they are HUGE (in their hometown of Austin at least).

I sort of got into them for the first time there too - even though I was tired, couldn't get anywhere near them, etc - I felt like under the right circumstances - it could work out between us....He can sing, and it's definitely danceable. (ok, I like them, I'll say it)

Tickets are on sale for an October 19th CMJ Ghostland Observatory show at Webster Hall.

Is it safe to assume that the theme of this CMJ showcase is related to the fact that all the groups have at least one African American musician in them? Whatever it is, it's hot. No tix yet.