A drunken Spank Rock (Naeem Juwan) was the star of the mtvU Awards at Roseland Ballroom last night - on stage, and mostly off... 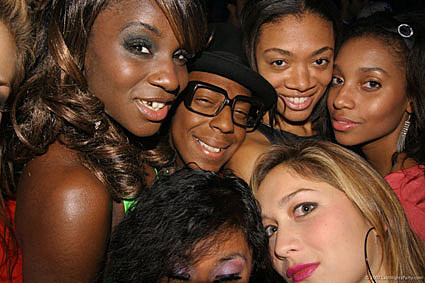 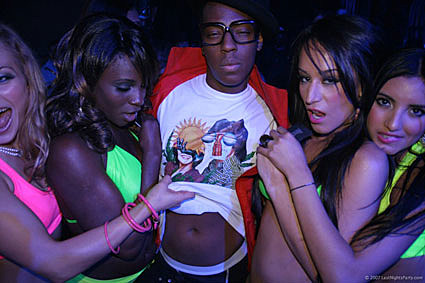 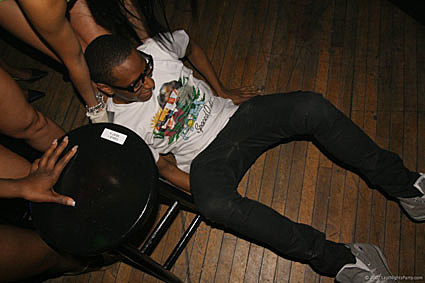 9:32 - (Spank Rock just came to our table and drank the Gothamist Liveblogger’s beer, then demanded I allow him to blog. What follows is exactly what he typed, unedited - obviously - except for asterisks to tone down the naughty words)

i stole a SHEW FRUM ALDO! I’M AT THE WOODY’S BLO0GGERS TABLE. MY DAD’S NAME IS WOODY. NOT JOKING! I TRIEDC TO MAKE OUT WITH TOM DULONGGG. HE WAS INTO IT BUT THERE WERE TOOO MANY CAMAMARERES AROUND. I UNDERSTAND….. I DRANK SOME B*TCH ASS N*GGAS (Ed. Note - That would be Gothamist Guy) BEER. HE AIN;’T DO SH*T. CAUSE I’M GANGSTER. I’M JUST A WILD ASS N*GGA DOING WILD ASS N*GGA SH*T! [Best Week Ever]

He eventually got kicked out, though he did show up again at the afterparty. His scheduled performance was actually just two songs. Santogold (and all the girls you see in the pictures) joined him for both of them. More coverage coming soon. More photos like those in this post, at Last Night's Party.

Spank Rock's antics = way more interesting than who won, but if you're interested......

For the artists who made the biggest splash on mtvU and the college music scene this past year.

This category is fast establishing a reputation for accurately picking the stars of tomorrow. Following in the footsteps of past winners the Killers (04) and Plain White Ts (06), this year’s coveted “Breaking Woodie” goes to…

They’re genre-busters. They resist classification. They came out of left field, and we’re still not sure what section of the record store to find them in.

The music video that is so incredible, we’d watch it even without the music.

Winner: Say Anything, “Wow, I Can Get Sexual Too” (J Records)

The award for the artists whose commitment to a social cause has effected the greatest change this year.

For those artists who take to the road and never let up, always giving that memorable live performance.

Alumni Woodie – (a.k.a. The You’re Still OK in our Book Award)

For the artists who’ve graduated into the wide world of mega-stardom, but who haven’t forgotten where they came from. And we’re proud to say, “We knew them when…”

A category for those acts that crashed servers and blew up the World Wide Interwebs all year long.

Winner: The Academy Is… (Atlantic Records/Fueled by Ramen)

The Best Music on Campus Woodie – (the most votes, streams and buzz on mtvU’s BestMusiconCampus.com)

The most promising unsigned college band in America, hand picked by the national college audience.