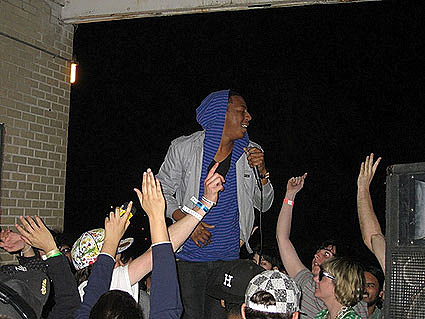 I came so close to seeing Spank Rock so many times at SXSW this year. One time was when he played the late night Todd P party (see above). I was there, but got too tired and left before he went on. Another time was at the Iheartcomix party at Blue Genie that got shut down an hour after starting. The cops kept me from Spank Rock that time. A third time was a party at the Scoot Inn that I just ended up not going to, AND I sort of tried to get Spank Rock to play both of my day parties, but that just didn't work out....SO, I'm gonna try not to miss his show May 15th at the new 800-capacity Highland Ballroom in the Meatpacking District in NYC. Tickets are on sale. The only other show he has right now is April 29th @ Coachella. No tour dates below.