"Spank rock isn't real hip hop , it would be disrepectful to have him on the same bill as Rakim.." [Anonymous] 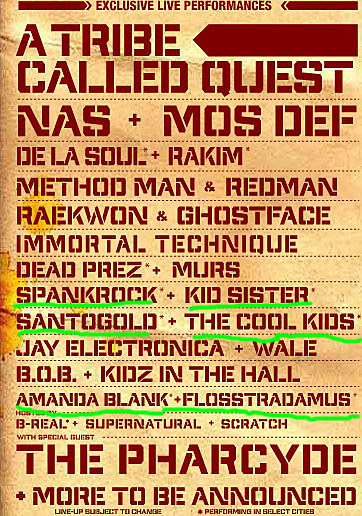 I don't know who wrote the above anonymous comment, but I've had more than one conversation with more than one hip hop fan about the very same thing - "real" vs "hipster" and/or "fake" hip hop. Are Spank Rock and friends "hip hop"? Does it matter? I don't care, but it's always a fun conversation, and I couldn't help but notice the strong prescence Spank Rock and friends have on this year's Rock the Bells festival lineup - a festival that is is, for the most part anyway, about hip hop.

on a related note: Santogold also has shows coming up at the Virgin Megastore and Summerstage. Spank Rock is playing Studio B.