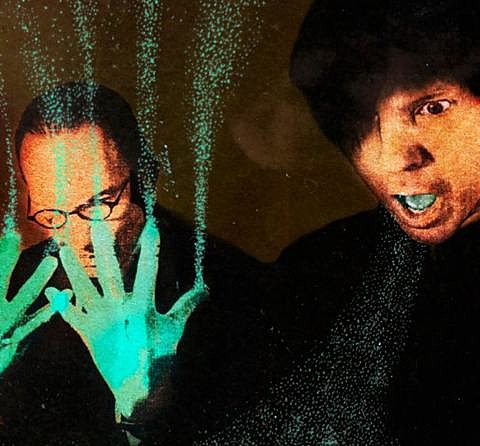 Well we had kind of been touring in different ways since 'Little Beethoven' time. We've been doing a lot of theatrical things to kind of expand on what we were doing as a band, we were using a lot of projections and computer sounds and all sorts of things to kind of.. we felt that we had taken the band approach as far as we could and we kind of wanted to make things as big and theatrical as we possibly could. We kind of felt that we had taken that as far as it could be taken so we thought that the only next semi-logical approach was to really go in the opposite direction and to try and do something just as a two piece with no computers and have even the appearance of the thing being less of a grand scale. The other side of it is that we didn't want it to be mellow at all, we wanted it to have the same aggression that we had in the previous state. In Los Angeles we went through.. we originally had about 50 songs and we just tried to figure out what worked out best doing it like this. It was hard to figure out keyboard parts which would compensate for all kinds of guitars and computers and that sort of thing. These are the ones that we thought worked best that way. - Ron Mael [Clash Music]

Legendary avant-pop duo Sparks are playing Coachella next month and are making a tour out of it. That includes a show in NYC at Highline Ballroom on April 25. Tickets are still available.

The show is part of their "Two Hands, One Mouth" tour where Ron and Russell Mael strip down their 40-year catalog to just keybords and voice. Video of that tour's stop in Olso last year -- featuring their classic "This Town Ain't Big Enough for the Both of Us" -- is below. Sparks' most recent album is 2009's The Seduction of Igman Bergman, which is finds them as wonderfully strange as ever.

All Sparks North American tour dates are listed below...