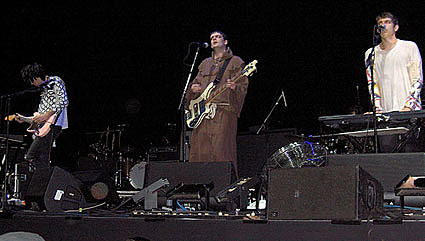 2007 Mercury Prize winners the Klaxons opened for Bjork at Madison Square Garden the other day. What were they wearing? I don't even recognize them. Is this Lovefoxxx's influence? Tickets are on sale for their Webster Hall show (which Shitdisco is no longer playing).

Speaking of funny outfits, Bat For Lashes - sometimes compared to Bjork (and I'll admit that Natasha Khan does do a mean Bjork) didn't win the Mercury Prize. They did play Bowery Ballroom this week though.

New Young Pony Club (also nominated) are playing Studio B on Thursday October 18th for CMJ. It's the Modular Records party. Muscles & The Cool Kids are also playing live, and Simian Mobile Disco are DJing. I saw NYPC at the Oya Festival in Norway this summer, and I didn't like them nearly as much as I did when they last played Brooklyn.

I didn't love Fionn Regan (also nominated) when I saw him at Austin City Limits. I was also saying he must have fans here though - because he's headlining the Gramercy Theatre. I knew that statement would come back to haunt me. The show was moved to Mercury Lounge. Tickets are on sale.

Amy Winehouse (I won't say it again) is releasing a DVD, played with Prince, and is to blame for your drinking problem.