"People hear that word disco, and they see bellbottoms and 'That '70s Show.' No, no, no," says Murphy. "This is real liberation music for people who know where to go. This is the real deal." 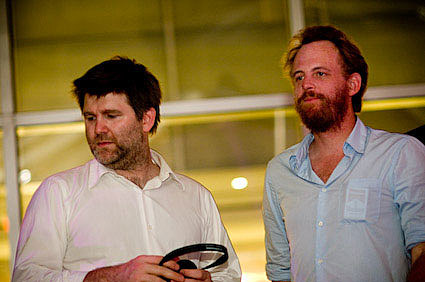 "The frequently overlooked and undermined period of American musical history resulted in some of its richest material, inspiring Murphy as he built DFA; and creating the role of the DJ and structure of the nightclub as we now know them. With bands like DFA's own Hercules & Love Affair snagging critical and fan praise all over the world, the air is rife for a second disco revolution.

'Special Disco Version' is an old term for a dance interpretation of a pop song, now known as a remix. It was frequently printed on a circular sticker and slapped on the record's sleeve, left for Murphy and Mahoney to discover 30 years later as they plumbed the bins at New York record stores. SDV the party will bring back such gems - some of which are more rock than dance, and more minimal than orchestral - to curious dance floors, and mix them with new material. The fresh blend will rock the party in unprecedented ways, and offer LCD fans a new perspective on the musical roots of their favorite band.

'With SDV, I can keep experimenting with remixes that we're working on, I can keep playing new stuff, and I can keep finding old records,' says Murphy.

SDV's disco is The Bee Gees' 'You Should Be Dancin',' but not the original: The unreleased dub version. It's not Studio 54: It's The Loft, a NYC venue open at the same time, where the music was so much the focus that DJ David Mancuso would let songs finish in silence, rather than mix them into each other, so each could be appreciated on its own. It's Francis Grasso, the New York DJ who would blend Led Zeppelin and Aretha Franklin during marathon, 12-hour sets, and reportedly lived in his DJ booth at West Side club Salvation. 'How punk rock is that?' says Murphy."

Six upcoming Santos dates and other dates other places in the world....