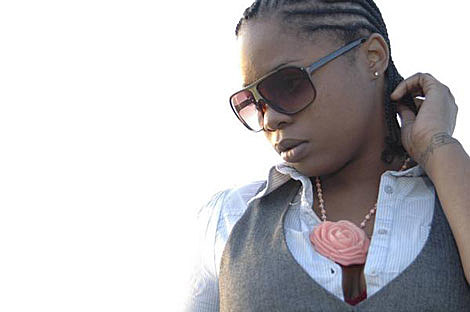 The Park Lane Grovesnor hotel, in central London, erupted into cheers as the 26-year old rapper from south London rose to accept the prize for her debut album Speech Therapy.

Speech Debelle, real name Corynne Elliot, appeared overwhelmed by the occasion and looked close to tears as she accepted the prize, despite displaying a cocksure attitude in the run-up to the event telling interviewers she fully expected to win.

"It means a lot to me because it's an award judges give solely on the strength of the album," she said.

"Before they said my name I had a moment of doubt, I thought 'what if I don't win? What about all the people who supported me?' and then they announced my name and I didn't have time to react, I was being mobbed." [Guardian]

I just got excited when I found out Speech Debelle won this year's Mercury Prize. I wasn't necessarily rooting for her before.... Truth is I barely heard of her before, but after recently learning she was coming to NYC for CMJ this year, I started listening to the album over Labor Day Weekend, and I've been loving it.

Speech Debelle told her producer Wayne "Lotek Hifi" Bennett to make her sound like a "hip-hop Tracy Chapman". For better and worse he succeeded. The 26-year-old south Londoner's debut Speech Therapy is a rap album rooted in the genre's respectable, conscious traditions - the lineage typified in the 1990s by A Tribe Called Quest, Mos Def, Common and Arrested Development.
[The Independent]

Debelle beat Florence & The Machine, Kasabian, Bat for Lashes, Glasvegas, Friendly Fires, The Horors, and others for this year's Mercury prize.

'Speech Therapy' (the album) was released here on August 18th by Big Dada and features a guest appearance by Micachu (bonus). A version of that song ("Better Days") is available for download above along with a song by Pete Lawrie that Debelle guests on. The video for "Better Days"), and some UK tour dates are below...