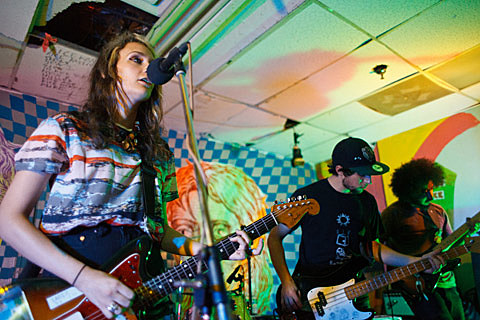 Speedy Ortiz singer Sadie Dupuis gave an interview to SPIN, where she announces that the band will release the followup to their excellent 2013 debut, Major Arcana (and 2014's Real Hair EP), this year. It's called Foil Deer, and comes out on April 21 via Carpark, who also put out their last two releases.

It's their first album with Grass Is Green guitarist Devin McKnight now that Matt Robidoux is on hiatus from the band (maybe you caught Matt's band Curse Purse in NYC over the weekend). About playing with Devin, Sadie said, "There are certain songs that I can point to in Speedy Ortiz where I'll say to him, 'Dude, I was just trying to rip off your guitar playing on this part. So, in like a weird way, the songs sound more like they were supposed to now that he's playing on them."

Sadie also said that this record doesn't sound like their previous stuff, and unlike Major Arcana, which was recorded live in four days, this one was recorded in three weeks and utilizes more overdubs. "We did a lot of intense keyboards, which is a big change for us," she says. They recorded it with Nicolas Vernhes, who's also worked with The War on Drugs, Deerhunter, Dirty Projectors, Animal Collective and more.

Stay tuned for music from the LP. Their only currently announced date is Shaky Knees Festival.