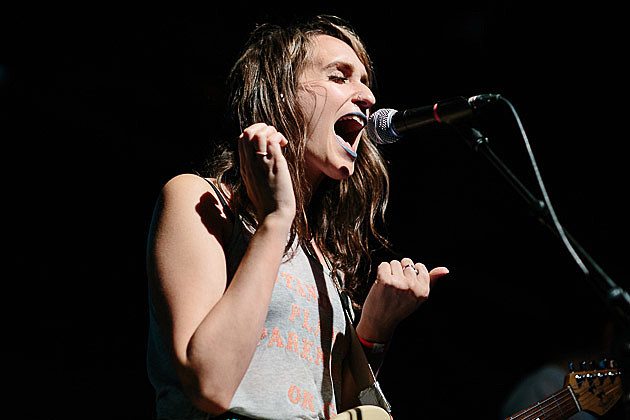 Earlier this week Speedy Ortiz announced a Girls Rock Camp Foundation benefit happening in NYC at Palisades on 12/12 with Aye Nako. Turns out that show is part of a full tour benefiting GRCF with varying support from both Aye Nako and Downtown Boys. Speedy's singer Sadie Dupuis says:

We toured non-stop in 2015 and wanted to cap it off playing a series of all ages shows (which is always our favorite kind of show). We've also wanted to do a tour with a charity fundraising component for a long while. We've done a few fundraisers this year--for the Ferguson Library and the Baltimore Food Bank--but for this tour, we wanted to do something that had a national impact while still supporting local communities.

The Girls Rock Camp Foundation was the perfect choice. GRCF provides funding and support to the the various Girls Rock organizations around the world, which in turn provide affordable music education to kids. Girls Rock helps level the music business' playing field by coaching girls to form bands, develop skills in music engineering and technical production, and build their self esteem along the way. We love the work GRCF does, and are proud to support them on this tour--and can't wait to play with a Girls Rock Boston band at our hometown show! We're also so lucky that our friend Michael DeForge, one of the best comics writers and illustrators around, has designed a narrative poster series to help benefit GRCF as well.

The donation options for the shows look something like this:

That Palisades show appears sold out, but the tour also includes another NYC show on December 11 at Silent Barn with Downtown Boys, Eskimeaux and Very Fresh, and DJ sets by Jenn and Liz Pelly. As of yet there are no advance tickets.

All dates are listed, with their video for "Swell Content," below...