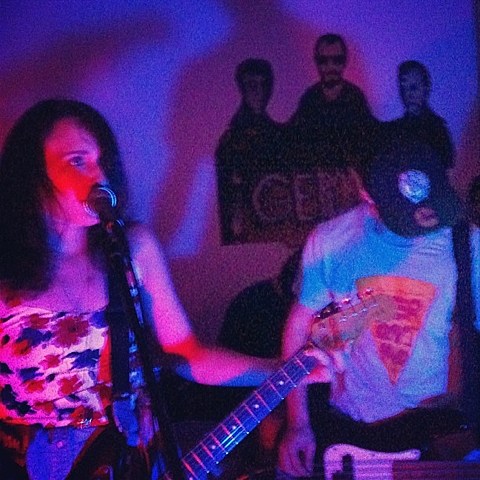 After catching Chance the Rapper at Europa on Saturday (6/15), I finished my day 3 of Northside Festival at Big Snow for the Exploding In Sound showcase. The place had already hit capacity by around 9 PM (not an everyday feat for Big Snow), and every band I saw was pretty great. The similarly styled stop-start post-hardcore of Grass Is Green and Two Inch Astronaut (who were playing much of the material from their new album, Bad Brother, out this week) was totally on point. Not only do both bands have the chops for their sometimes-technical sounds, but they've got a ton of power on stage too.

One of the main attractions of the night was Speedy Ortiz, whose debut album, Major Arcana comes out on July 9 via their new label home, Carpark Records. Speedy's a great band recorded, but they bring even more rage live. Singer Sadie Dupuis screams more, their guitars ring with layers of distortion, and guitarist Matt Robidoux ended up crowd surfing at least once. They have a great time on stage too. Performance stuff aside, one of the most memorable moments of the show was the drummer singing "Started From the Bottom" and then dedicating their next song to Yeezus.

And though Speedy was the fastest-rising band on that bill, there was tons of love for headliners Pile. The whole crowd became a push pit, with crowdsurfers knocking into Big Snow's light fixture, and anyone looking to "watch" the band standing on top of whatever amp or couch they could find lining the venue. The band sounded great too, straddling the line between indie rock melodies and punk intensity. Their 2012 album, Dripping is a good (and underrated) one, and a recommended listen if you haven't checked it out.

Unfortunately, I missed the earlier bands at Big Snow on Saturday. If you were there, how were they? You can catch Speedy Ortiz in NYC again when they play their record release show at Death by Audio on July 5 with a great bill of Roomrunner and California X. Updated Speedy dates are listed, along with streams of their recent singles, below...

Speedy Ortiz - "No Below"