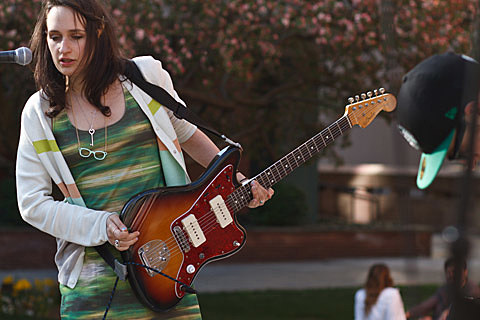 As mentioned, Northampton, MA's Speedy Ortiz have signed to Carpark Records and will release their debut album, Major Arcana, on June 9 via their new label. The album perfects the formula Speedy Ortiz had on the Sports EP and "Ka-Prow!" 7" and tops both of those releases. That's immediately evident from the album's first single, "Tiger Tank," which starts out like the Speedy Ortiz we're familiar with, but by the chorus is bringing in melodic left-turns and powerful crashes that show how big of a force this band can really be. Listen to the song over at NPR.

As mentioned, Speedy Ortiz have a number of upcoming shows, including a few previously discussed NYC shows on May 17 at Silent Barn with Island Twins, Advaeta, Idiot Genes, and Lunchbox; Cake Shop on May 31 with two great Brooklyn bands Sleepies and Bennio Qwerty; and an unofficial Northside show on June 15 at Big Snow Buffalo Lodge.

The rest of the lineup for that Big Snow show has been announced and it includes Pile and Fat History Month (who just played NYC together), in addition to Two Inch Astronaut, Grass Is Green, Ovlov, Porches., and Hive Bent. The show is being presented by Exploding In Sound Records and Gimme Tinnitus.

Speedy were also since announced for a NYC Popfest show happening on June 1 at Public Assembly with Ringo Deathstarr, Sua, and Advaeta. Advance tickets for that show are on sale now. Popfest was supposed to be on both stages at Public Assembly, but with renovations all the other bands originally booked except Ringo Deathstarr were moved to The Bell House (more on that in a Popfest-specific post coming soon). Festival passes are still accepted.