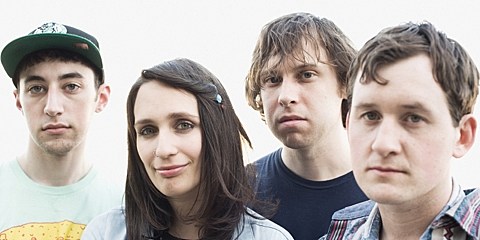 Speedy Ortiz had one of the finest indie rock albums of the year with Major Arcana which we're already seeing on some best of 2013 lists, and we asked them for a best of 2013 list of their own. The four members of the band, singer/guitarist Sadie Dupuis, drummer Mike Falcone, bassist Darl Ferm, and guitarist Matt Robidoux, all agreed on a number one pick for the year (spoiler: it's not an album), and then the members listed individual picks, including some albums, a TV show appearance, a computer game, an art exhibit, a movie, a book, and more. Their full list, with commentary, is below.

Speedy Ortiz have a ton of tour dates coming up, including stops in NYC supporting The Breeders who will be playing Pod and Last Splash at Webster Hall on December 19 and 20. Tickets for those shows are still available, and we're also giving away a pair to each night. Speedy also open for Los Campesinos! at a couple shows including their NYC stop on 1/22 at Irving Plaza (tix).

All tour dates are listed, along with their new video for "No Below," and the year-end list, below...

Speedy Ortiz - "No Below" Official Video

Exploding in Sound Records
This has been an amazing year for our friends (and former labelbossdudes) at Exploding in Sound, including releases from Geronimo, Fat History Month, Two Inch Astronaut, Ovlov, Porches., My Dad, and Palehound. Plus, Dan Goldin and Dave Spak have hosted a slew of EISR showcases/family reunions, featuring all of the aforementioned bands, label buddies Roomrunner, Hive Bent, and Gnarwhal, as well as EISR stalwarts Grass is Green and Pile (and, uh, us). Those are twelve of our favorite bands, and we're so grateful to be included in this community, so we unanimously selected Exploding in Sound as our collective favorite part of 2013.

(PS, you can catch many of those bands at the Exploding In Sound year-end party with "special guests" (tix)

Ariana Grande Getting Haunted By Demons
Okay, I kinda dug Ariana Grande's Yours Truly, and so a substantial percentage of my 2013 Google queries had to do with this young Mariah sound-alike. A sample: "how tall is ariana grande"; "ariana grande dating anybody"; "nickelodeon industrial-complex"; "ariana trenta." The best thing that turned up was her interview with Complex, in which she claims affinity for Harry Potter, extraterrestrials, and ghosthunting. She goes on to outline her own "textbook demon"-haunting at Kansas City's Stull Cemetery, which is apparently one of the gates to hell. "Baby I" has sounded a lot more like "Baby OoOoOoOoOOhhh" ever since. - SD

Chris Weisman's "Maya Properties" To Be Pressed On Vinyl
CW's 88 song made for youtube album (imagine a piano that plays a song for every key) will be released via Feeding Tube Records on an 8 LP set, the first one clipping in just before the end of year mark. - MR

Die or Get Rich Trying by The This Many Boyfriends Club
Hailing from Montreal, this band is bring rock back to a scene cluttered by poutine and bad accents. They are the only band I've heard that reminds me of Life Without Buildings, which kicks ass. - DF

James Franco With Cornrows Singing "Everytime" by Britney Spears (scene from "Spring Breakers")
Harmony Korine is still #1 when it comes to song placement, with the backyard grand piano sequence among his best mindfuck juxtapositions, alongside his thrust of Buddy Holly and Roy Orbison into Gummo. - MF

Jeffrey Tambor's Appearances on Law and Order SVU
The paternal Bluth played a hotshot defense attorney in three episodes of SVU this year, all of which were ripped from the bizarro headlines of Htrae. Sassy, dismissive, and seriously good at raising reasonable doubt, Tambor defended a fake Chris Brown (who ultimately MURDERED both fake Rihanna AND fake Jay-Z), and then got "Paula Deen" off the hook for her fictional slaying of "Trayvon Martin" (dicey, SVU, very dicey). It's been nice to see Tambor on a TV show that doesn't involve the Netflix resuscitation of some other TV show--I hope we see more of him in 2014.  - SD

Phillip Guston Centennial Exhibition at McKee Gallery
I felt fortunate to be able to see a comprehensive retrospective of Guston's late work this past spring in New York, including the profile of Morton Feldman smoking and the still life of PG's workout shoes.  Guston's grandiose juxtapositions of form, radical color and scale aired a spiritual presence in the gallery that I had not perceived from the printed page. - MR

Seconds released by the Criterion Collection
John Frankenheimer's 1966 masterpiece is possibly the most underrated movie I've ever seen. I've never met anyone else who has even seen the film, and until this release, I had never seen it for home release, except for a VHS copy I picked up on our first tour. This is definitely one of the best forgotten films for Criterion to restore and release, and it makes me very happy that they did. - DF

The Concert In "Ginger Cow" (Scene From "South Park")
"Only one emblem can truly signify the unprecedented coexistence of religious union." - MF

The Grandmaster
I'm very glad Wong Kar-Wai has decided not only to direct movies in China again, but also made another movie with Tony Leung. Kar-Wai and Leung are one of my all-time favorite director/actor combinations, and I'm extremely nerdy about film, so this was a big one for me/Chinese film/the general subconscious of humanity. - DF

You Are Not Dead by Wendy Xu (Cleveland State University Press)
Wendy Xu is one of my favorite Western Mass writers, and I'd say so even if she didn't occasionally drink beer with me. Her debut book You Are Not Dead is killer, navigating relationships, mortality, dreams, and introspection. Take "Unapologetic Poem," for example, which starts off with "There are reasons to ride a bike not / related to joy. But you don't believe in not / believing." Through twists of Xu's optimistic deadpan and off-kilter platitudes, it winds up with "[Y]ou don't say anything / about moving through all those stars." Nice moves, Wendawg. - SD