Majical Cloudz at Warm Up in 2013 (more by Amanda Hatfield) 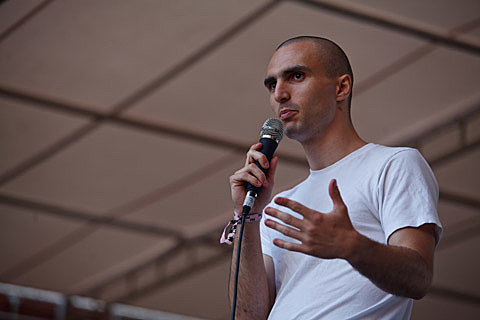 Spencer Madsen is a writer who will, with equal enthusiasm, tweet a selfie of his butt and write the sincerest, saddest line of poetry you've ever read. Like so many of us, he's drowning in stimuli, emotion, options and the up-and-down of the weird 21st century world, but unlike most of us, he's wonderful at succinctly expressing his feelings about it--the 140 character limit of a tweet is the guardian angel of his work, whether that's through mooning the world on social media or using the tone of the internet to write about sad cats. Even when he has the space of an entire book, like his new one, You Can Make Anything Sad, he fills it with short lines and thoughts that grab your attention with their earnestness and arrest the unending, often cynical feed of modern media--he and peers like Mira Gonzalez, Gabby Bess and Steve Roggenbuck have helped bring poetry out of the grad class and made it urgent again. [The FADER]

Brooklyn poet Spencer Madsen releases his new book, You Can Make Anything Sad, this week (4/29) and he'll be celebrating it with a release show in NYC on May 4 at the Marlin Room at Webster Hall. He'll be reading, along with Das Racist's Kool A.D. and Mira Gonzalez. Montreal duo Majical Cloudz will also play a set at the show. Tickets are on sale now.

Majical Cloudz also have a few festival dates coming up, including upstate NY's The Hudson Project. All of their dates are listed, with the flyer for the Webster Hall show, below... 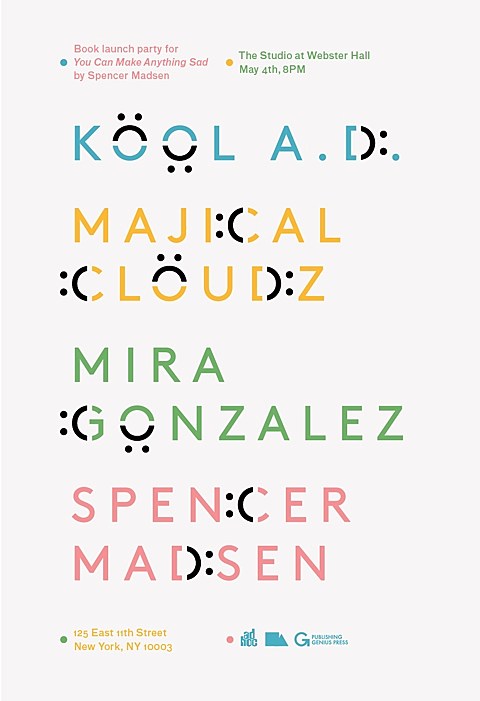