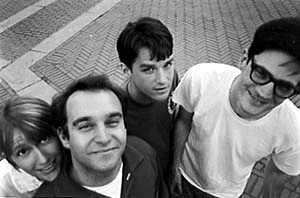 Spent formed in the early 1990's in Jersey City, New Jersey. After releasing several EP's under various independent labels the band released their first full album. Songs of Drinking and Rebellion was released in March of 1995 on Merge Records, a indie label formed by Superchunk's Mac McCaughan and Laura Ballance and a band that Spent toured with extensively throughout their career. In September of 1996 the band released an Ep entitled Umbrella Wars, which included a cover of Joe Walsh's A Life of Illusion. Umbrella Wars served as a teaser for their next album released a month later in October of 1996 entitled A Seat Beneath the Chairs. In 1997 John King joined Superchunk lead guitarist Joe Wilbur in a side project called Humidifier releasing the album Nothing Changes on Link Records. On July 21, 1997 the band officially split. In 1999 their last song "(I'll Clean Up) The Mess That You Are" appeared on the 10 year anniversary album of Merge Records called Oh, Merge. The band never received much attention outside of the 90's indie rock world. [Wiki]

As previously noted, Spent are reuniting for the XX Merge Records festival happening in North Carolina in July, but first the band will play a single show, presumably as a warm-up for the festival, and it will take place at Coco66 in Brooklyn on June 29th. Also on the bill at that show is Heather Duby, whose credits include albums released by Sub Pop, Suicide Squeeze, and Sonic Boom.

Coco66 is killing it with the reunion booking lately. The Van Pelt just played a show there too.

Speaking of Mark Eitzel, his tour dates have actually been updated some since we last spoke. You can check them out below...

* the XX Merge show is ACTUALLY American Music Club, and not just Mark.