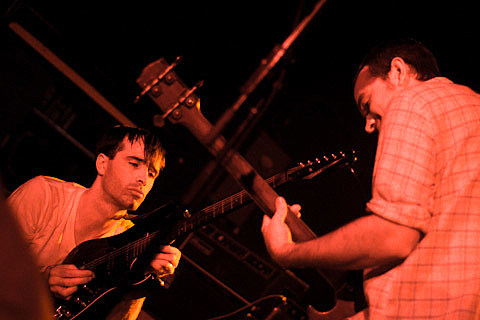 North Carolina rockers Spider Bags are probably best known for having made a huge fan out of Titus Andronicus' Patrick Stickles and for appearing on their 2010 album, The Monitor, along with a slew of other guests. They've got three of their own albums out, including the most recent release, Shake My Head, which came out this past August on Odessa Records. Literally 2 seconds into album opener, "Keys to the City," it becomes clear why Patrick is a fan (or why they may have been influenced by Titus in return) and that vibe continues through the rest of the fast paced (and slightly country tinged) album. You can download Shake My Head single, "Friday Night," at the top of this post, and stream it along with (almost) the rest of the entire album below.

Spider Bags will be making their way to NYC in 2013 for a show at Cameo Gallery on January 18 with Gross Ghost and Lazy Eyes. Tickets for that show are on sale now. It's their only announced date at the moment, but it wouldn't be surprising if more are revealed soon.

As for Titus Andronicus, they're on tour with Ceremony now and will return to NY/NJ on December 1 at Maxwell's (sold out) and December 2 at Webster Hall, the latter of which Lemuria was added to. Tickets for the Webster Hall show are still available.

Lemuria, along with Night Birds and Parquet Courts, were also added as openers to the upcoming Fucked Up show in NYC happening on December 21 at Warsaw, which makes for a really great lineup. Tickets for that show are still available.