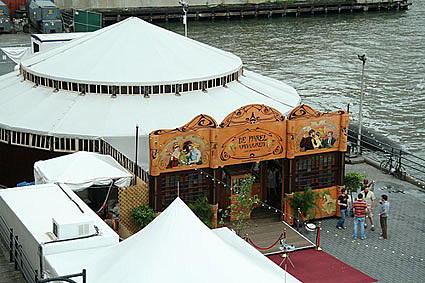 The Spiegeltent is returning to NYC for a second year of unique shows and concerts.

Tickets are on sale at Ticket Central. Photo via here. More details below....

Lady Sovereign (OPENING NIGHT!) - July 7 @ 11:00pm
An exclusive opening night celebration featuring one of the world’s hottest young contemporary artists. Recently back from a national tour with Gwen Stefani, Lady Sovereign has climbed to become one of the most respected hip-hop artists of her day. She’s the self-proclaimed white midget with a barely there 5’1 frame. An MC, a lyricist, a producer, the alternative microphone vandal with lyrics that hit like left and right hooks, subject matter dashing between flirtations with McDonalds and swigging Pernod. Regardless of gender or generation, you can be assured that Sovereign’s making the kind of noise that will see her reign supreme.

Weimar NY: The Spiegel Sessions - July 17 @ 10:00pm; August 28 @ 10:00pm; September 18 @ 10:00pm
WEIMAR NEW YORK is a downtown star-studded theatrical cabaret that juxtaposes the aesthetic and music of Weimar-era Berlin with that of the contemporary downtown performance scene in New York City. Performers come to the show from a variety of backgrounds: from classically trained singers and musicians to performance artists and burlesque acts. The evening celebrates the spirit of creative resistance that thrives in response to conservative political forces be they the rising tides of Nazism in Weimar Germany or fundamentalist Christianity taking root in the contemporary United States. The exclusive Spiegeltent season performers include Justin Bond, Meow Meow, Taylor Mac, Theo Bleckmann, Holcombe Waller, Sanda Weigel, Daniel Isengart, Tigger!, Helen Stratford, Adam Dugas, and Curtis Eller and may many more!

Shout Out Louds - July 19th @ 11:30pm
The new Swedish invasion continues with the Shout Out Louds, a surge of romance and urgency, happy and sad, upbeat and lingering, danceable and reflective, and fueled throughout with gut-level emotion. The band makes their Spiegeltent premiere on their return tour to the US for an exclusive NYC engagement in support of their new Merge Records release OUR ILL WILLS.

DeVotchKa - July 24 @ 10:00pm; July 25 @ 11:00pm
By overwhelming demand, DeVotchKa makes an exclusive return to the Spiegeltent for another unforgettable pair of summer concerts. With a wholly unique melding of eastern European, Mariachi, and American punk and folk roots, DeVotchKa have quietly become one of the most celebrated bands in America today. With violin, accordion, sousaphone, trumpets, piano, and too many other instruments to list - the Denver four piece creates a sweeping and divergent orchestra behind soaring vocals. Dramatic, tragic, celebratory, DeVotchKa's live show is a revelation that inspires wild dance and tears, sometimes in the same song. Called 'Everything Music Should Be," by NPR's "All Things Considered," DeVotchKa were well on their way to breakout behind three self-released records before writing and performing the Grammy nominated score for the multiple Academy Award winning film Little Miss Sunshine. DeVotchKa interrupt the recording of their highly anticipated next record to return to New York's Spiegeltent.

An Evening with Ute Lemper: ‘Voyages’ - July 31 @ 10:00pm
Ute Lemper makes her Spiegelworld premiere with a special of evening of songs set to the heartsounds of the sea. Lemper's performing career grows out of a passionate and enduring commitment to art, politics and history, and out of a contentious and complicated relationship with her homeland and its past. Her panache, versatility and sophisticated repertoire - including Berlin cabaret songs and the dark gems of Bertolt Brecht and Kurt Weill - have led her to international acclaim as a recording artist, and in the theatre, cabaret and film worlds.

Lila Downs - August 7 @10:00pm; August 8 @ 11:30pm
Lila Downs (pronounced Lee-La) is a bi-cultural singer/songwriter raised in the Mixtec region of Oaxaca(a state of southern Mexico) and in Minnesota. Exploring and expressing Mexico's rich culture has been a lifelong passion for Lila. It was only through music that Downs reconciled her heritage. “It took a long time to decide that I wanted to sing,” she says. “Something needed to motivate me.” That motivation was the songs and stories of the Oaxacan people. Her Mixtec mother spurred Downs to sing songs with sentimiento — a deep, almost empathic emotion which has left audiences of all cultures and countries spellbound.

Badly Drawn Boy – August 14 @ 11:00pm; August 15 @ 10:00pm
A rare, intimate NYC evening with acclaimed singer-songwriter Damon Gough featuring songs from his latest acclaimed release ‘Born in the U.K.’, the heartfelt return from the British singer songwriter who gave us the stellar soundtrack to award winning film About A Boy.

José González - August 21 @ 10:00pm
Fresh out of the studio where he has just completed recording his new release slated for later this year, Gonzalez makes an exclusive NYC – area appearance. Born and raised in Gothenburg, Sweden, of Argentinean parents, 25-year-old José González is a top-ten chart artist and revered troubadour figure in Sweden, where he is cherished equally by the musical cognoscenti, seriously besotted critics and hordes of regular Nordic punters. Using just his own dexterously finger-picked classical guitar and a captivating voice - part Joao Gilberto, part Nick Drake – José’s music is as economical as it is seductive; stark but effortlessly melodious songwriting whose confessional, gently provocative lyrics (all sung in perfect English) are, by turns, poignant, intriguing and life-affirming.

O’Death - August 26 @ 11:30pm
Celebrating their recent acclaimed release on Ernest Jenning Record Co., the five guys of O’Death, maybe three shirts between them, return to the Spiegeltent stage. There’s a banjo, a fiddle, a drum set littered with gas cans, chains, and broken cymbals. Then they all start howling, stomping; it’s an anachronistic jug band party in a junkyard with sing-along hooks and weathered vocals from another time. Their fans, an ever-expanding congregation, sing along and follow the band with an almost religious fervor, and as vocalist Greg Jamie’s eyes roll back into his head there’s a sense that something almost sinisterly spiritual has overtaken everyone in the room. This is the world of O’Death.

An Albatross - September 5 @ 11:30pm
Philadelphia’s An Albatross is one of today’s not-to-be-missed live bands. They’re a sonic orgasm, a flurry of mechanical, jerky and discombobulated time signatures eclipsed by Farfisa organ/synthesizer pseudomelodies. Not unlike sitting down with an average American family behind the television set during primetime, the music is unquestionably attention-span friendly for an ADD diagnosed society: unbelievably short, complex, infectious bursts. Don’t miss the band’s Spiegeltent premiere.

Dan Zanes and Friends: Sea Music! Sing-a-Long at the Spiegeltent!’ - September 22 @ 2:00pm & 4:00pm
Grammy-Award winning family favorite Dan Zanes makes his Spiegelworld premiere with an exclusive daytime show of sea songs inspired by traditional maritime music and family outings to the South Street Seaport. A rare, intimate concert appearance from one of the country’s most popular family bands, these historical songs are of the men who worked on the sea but they're so full of vigor that they continually inspire spontaneous musical outbursts from people in all stations of life.

Spiegelworld will be presented under the Brooklyn Bridge at the Fulton Fish Market starting July 2, 2007.