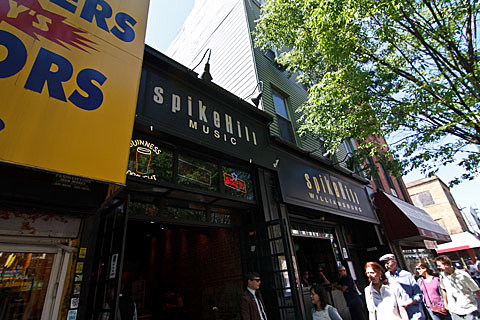 Death by Audio closed last weekend and New Year's eve will be the last night for Glasslands, both making way for Vice's new offices. And now comes word of another Williamsburg live music venue closing: Spike Hill, which is right by the Bedford Ave. L stop, will likely shutter for good before the end of 2014 reports Gothamist.

The employee, who asked to remain anonymous, was cagey about offering a final date for the closure, but conceded that "early December" was a workable timeline. He wasn't sure about future plans for the space, whether it would be kept intact or torn down, but said he didn't think "the building is worth anywhere near what the real estate is worth." One thing was definitely clear: "The building's under contract for a lot of money."

Spike Hill's venue hosted bands most nights, often without cover, and was home to NYC Popfest events for the last few years. The last show currently on Spike Hill's calendar is December 6 with Cold Blood Club, Of Clocks & Clouds, The Highway, Bondage & Discipline and Exiles.

December 6, incidentally, is the same day Glasslands is hosting an event called "A Dance Party Funeral for the neighborhood of Willamsburg." $10 at the door for that one.