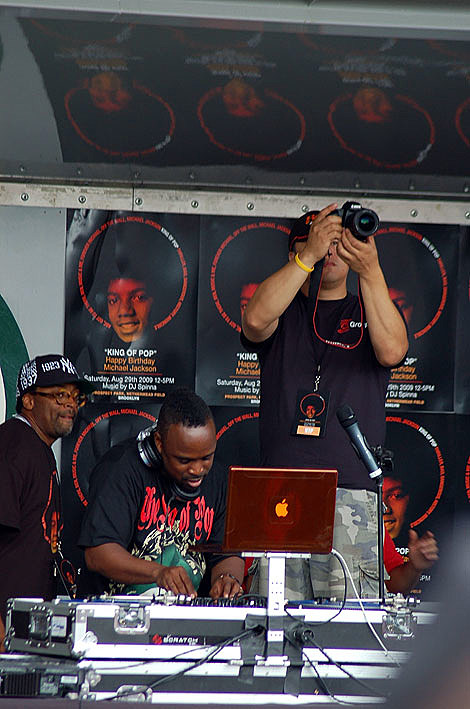 Michael Jackson still reigns as the King of Pop.

Thousands will gather in Prospect Park on Sunday at what would have been the musician's 52nd birthday for the second-annual "Brooklyn Loves Michael Jackson" celebration.

"I'm looking forward to everyone from all corners of the world coming together to honor, pay respect and love the life of Michael Joseph Jackson," said filmmaker and one-time Fort Greene resident Spike Lee, who worked with Jackson on his video, "They Don't Care About Us," and is organizing the celebration for the second year.

Last year, fans packed the park to pay tribute to the man behind such hits as "Billie Jean," "Thriller" and "Beat It," who died last summer, sporting Thriller outfits, white gloves and digging out their Michael Jackson T-shirts.

Expect more of the same during the five-hour party, where DJ Spinna will play the pop genius's innumerable hits.

"It's going to be bigger and better this year," said Lee, who will be documenting this year's celebration with his production company, 40 Acres And A Mule. "People are going to come from all over the world." -[BrooklynPaper]

If there's one thing that DJ Spinna knows, it's a killer theme party. The mixologist's incredible work with Prince Vs Michael Jackson Soul Slam, (Stevie) Wonder-Full, The Jackson Family, 90s Indie Hip Hop, and countless others sets him apart as one of the great funk/groove/hip hop DJs in the area. The free event takes place on Sunday, August 29th in Prospect Park's Nethermead Field. It kicks off at noon and ends at 5:00 PM. Directions below.

The show is one (Gary Indiana with Joe Jackson) of many (9:30 Club in DC) tributes (a party in LA) happening (mjFanvention in Merriville, IN) around the US (Hueman bookstore in NYC).

More pictures from last year HERE. A pair of videos from Spike Lee and directions to the party are below...

Reminder from Spike Lee to come to the Michael Jackson party 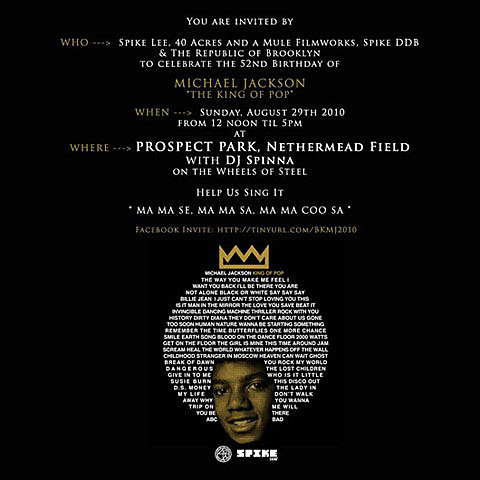