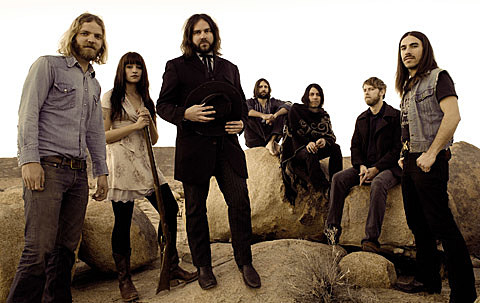 Over the past few LPs, Spindrift have taken cues from Ennio Morricone, psychedelia, fuzz and everything in between to creat soundtrack-y anthems that would fit comfortably alongside some of the gritty films of the 70s and beyond. Now the band aims to spin their influences into a new effort on Xemu Records:

We have finished the pre-production phase and have signed to Xemu Records to release the album in Spring 2011... The songs will be tracked and documented at Hicksville Studio Dec 4-12, 2010. Engineer Ethan Allen (Gram Rabbit) will be mixing and editing the record and Steve Kille from Dead Meadow will assist.

The band has set up a Kickstarter program to help with the funding of the LP. Contribute (if you can).

If you want to contribute in another way, catch Spindrift live. The band is currently on tour and will link up with Dinowalrus and The Runaway Suns to play Knitting Factory on November 16th. Tickets are on sale.

Full tour dates and some video is below.

Speak to the Wind - Spindrift [Live]