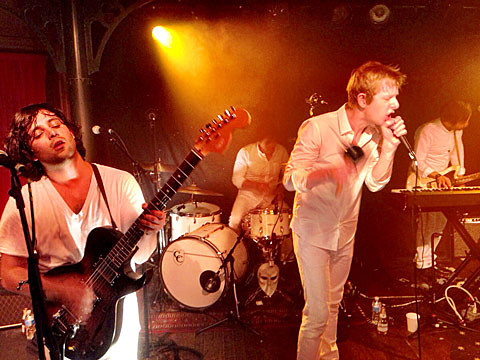 "This is a pretty cool summer, right?" asked Britt Daniel, smiling like the Cheshire Cat, as Spoon took the stage at the McKittrick Hotel last night (8/3), a surprise record release show for the band's terrific new album, They Want My Soul, which is out this week. The McKittrick is home to Sleep No More, the extremely interactive adaptation of Macbeth and a little of that David Lynch vibe was part of the show. Before Spoon came out, a group of people came through the crowd dressed in white robes, and one of them sang a Django Reinhardt-style-arrangement version of the new album's "I Just Don't Understand" before the curtains opened up to reveal the band. (I was also pulled off the elevator into a phone booth where, after being told to make a call, was taken into a secret room where I was given a sacrament. Freaky, disorienting, but fun.) Spoon were in good spirits, having played Lollapalooza just the day before in Chicago. Guitarist/keyboardist Alex Fischel (imported from Divine Fits) had some amp issues but they took it all in stride. They were definitely having a good time, as was the 300 or so people in attendance. (Spoon has been sending out "mystery mailers" to fans, invites to this was one of them.) We got 13 songs, a little more than half from They Want My Soul mixed with favorites like "Small Stakes," "I Turn My Camera On," and "Black Like Me." Setlist is below.

Spoon will be back in about a month, playing Central Park Summerstage on September 10 as part of their upcoming tour. Still no opener announced for that one but tickets are still available.

Setlist, and a couple more cameraphone pics, below...

SETLIST: Spoon @ McKittrick Hotel 8/3/2014
Knock Knock Knock
Inside Out
Small Stakes
The Beast and Dragon, Adored
Do You
Don't Make Me a Target
Outlier
Who Makes Your Money
Rent I Pay
Got Nuffin
Encore:
I Turn My Camera On
You Got Yr. Cherry Bomb
Black Like Me