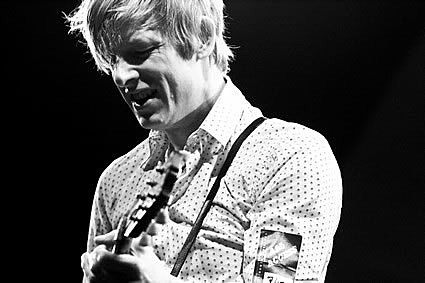 Spoon's new album, Transference, is out January 19th on Merge. The entire album is now streaming at NPR who are also hosting the band at SXSW this year...

- For the third year running, NPR Music will present, broadcast and webcast the opening night showcase of the South by Southwest Music and Media Conference in Austin, TX, when it brings Spoon to headline Stubbs on Wednesday, March 17. The concert will kick off Spoon's U.S. concert tour in support of its forthcoming album

We're still waiting for the entire tour announcement, but their previously mentioned NYC show will be happening at Radio City Music Hall on Friday, March 26th. The openers will be Deerhunter and the Strange Boys. Tickets go on sale Saturday, January 16th at 11am.

The Strange Boys (now with ex-Mika Miko members) have a new album of their own out this February and tour dates in late Feb/early March in the Western US.

Deerhunter doesn't have any other upcoming shows that we know about yet, but Bradford's other project, Atlas Sound, has a show at NYU with Neon Indian, and one at The Bell House with Memory Tapes.

Spoon interviewed their mastering engineer Howie Weinberg about the new album ("It's really different than the last record...it's more rootsy...a little more hip hop...it's got a dirty side to it that I really like," he says). That and a few live videos of the new single, and all dates, are below...