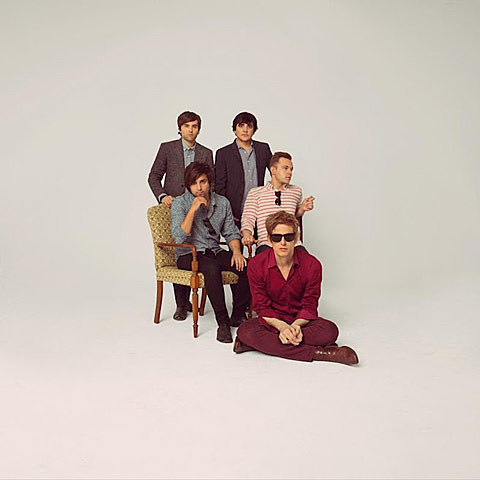 Spoon have announced their first new album in four years, They Want My Soul, which will be out August 5 on new label home Loma Vista after more than a decade being on Merge. The album was produced by Joe Chiccarelli (who made the new Morrissey album) and Dave Fridmann (The Flaming Lips, MGMT, etc). The band have been teasing something new -- black posters bearing the words "Spoon R.I.P. June 10" have been on Bedford Ave in Williamsburg for a few weeks -- but you can hear snippets of the new album as part of an "All Songs Considered" interview Britt Daniel and Jim Eno did on NPR.

Here's a bit from the interview:

ENO: Yeah, yeah. The other funny thing about Dave [Fridman], I feel like he's so mild-mannered. We would be like, "Do you think this is too distorted?" And he would be like, "I'm the wrong person to ask about that," 'cause he loves distortion. And he likes things dirty and exciting and crazy and weird.

DANIEL: Yeah, it doesn't even sound like distortion to him.

ENO: Yeah, yeah. And he said after working with The Flaming Lips and doing a lot of those records, things only sounded right when they were distorted. The more work you do, you start getting a sound. But it was funny, 'cause we were sometimes questioning if there was too much distortion. He's like, "I don't know, you know? Wrong person to ask."

Listen to the whole thing over at NPR. We'll probably get some new songs when Spoon play this weekend's Governors Ball. And stay tuned for something June 10.