L to R: Stretch Armstrong, Bobbito, and Lord Sear (via) 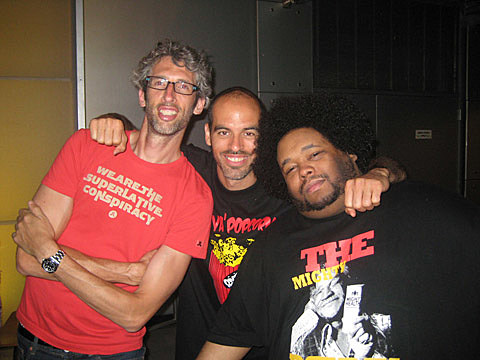 One of the greatest underground hip hop radio shows of all time will celebrate their 20th Anniversary with a show at Le Poisson Rouge on Feb 10, 2011. Lord Sear will join Stretch Armstrong and Bobbito at the venue "with special surprise guests" and tickets are on sale. No word on the "special surprise guests", but knowing the long list of MCs and DJs that have blessed the show over its existence (names like Jay-Z, The Notorious BIG, Junior Mafia, Artifacts, X-Men, Souls of Mischief, Diggin In The Crates, Nas, etc, etc, etc) it wouldnt be that far fetched to expect someone great. XXL recently ran a piece on Stretch & Bob's greatest freestyles - it's a must read/hear.

The news of the reunion show comes a little more than a month after the death of WKCR's "Squeeze Radio"..

Hip-Hop radio at Columbia University's WKCR is on its deathbed and... the legendary crew of Stretch Armstrong & Bobbito Garcia, as well as DJ Sucio Smash, [have] broadcast their finale [on 10/21].

...Sucio Smash inherited the "Squeeze Radio" show's time slot--1am to 5am on Fridays--from the ballyhooed "Stretch Armstrong & Bobbito Show." Like its predecessor, "Squeeze Radio" (WKCR is 89.9 on NY's FM radio dial) provided a place for listeners to hear the latest hip-hop music while offering an alternative to the strict, and repetitive, playlists of mainstream rap radio.

"What DJ Sucio Smash and Squeeze Radio provides is an alternative for hip-hop fans who have grown tired of the politics behind commercial radio," says Rob Markman, Deputy Editor of XXL Magazine. "Since 2001 "Squeeze Radio" has cut through industry politics and given fans hip-hop in its purest form. It's a shame that rap fans are going to lose this outlet." -[MTV News]

Naturally, many have voiced their opinion on this move. Hear the final show in its entirety.