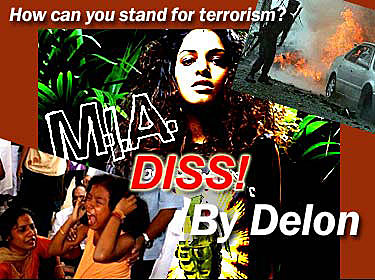 Warning: the below video is very graphic....

ACTUALLY: YouTube takes the video down the second I upload it, so you'll have to download it

Sri Lankan/American hip-hop artist, DeLon, questions Interscope recording artist, M.I.A., for using images representative of the terrorist group, The Liberation Tiger Tamils of Eelam (LTTE). The LTTE has long been recognized by the FBI as one of the deadliest terrorist groups in the world, and has been credited with the perfection of the use of suicide bombers, invention of the suicide belt, mass recruitment of child soldiers, and pioneering the use of women in suicide attacks. The LTTE is only terrorist organization to have assassinated two world leaders.

DeLon at the BET Awards 2008On July 29, 2008, DeLon posted his remixed version of M.I.A's song, "Paper Planes" on YouTube. The educational video contained graphic evidence of M.I.A's imagery and usage of the symbols of the LTTE. Within 12 hours of release, the video drew over 10,000 user views and comments. Hours later, Interscope under the Universal Music Group (UMG) umbrella, had the video removed from YouTube for "endangerment" of M.I.A.'s reputation as a "Freedom Fighter." Subsequently, DeLon is filing a lawsuit against UMG for infringement of his 1st Amendment rights. On July 31, 2008, the video was made available for download at: http://public.me.com/ceylonrecords and generated over 6,000 downloads in just 2 hours.

As the most recognizable Sri Lankan hip-hop artist after winning the "Best Rap Performance" Award from Derana Music Television (equivalent to MTV in the U.S.) and an emerging international star, DeLon, uses his visibility and music to draw light to the LTTE's ongoing and inhumane terrorist attacks in Sri Lanka. As one of the few entertainers willing to stand up to the LTTE, DeLon has drawn mass popularity and unprecedented support from Sri Lankans and Sri Lankan expatriates throughout Sri Lanka, Australia, Germany, the UK, Canada, France, and the United States.

DeLon is the first Sri Lankan/American to ever land on the U.S. Billboard Charts, a feat he accomplished twice for his singles: "Calor De La Salsa" and "Nasty Girl." As exemplified with his "The Unity Through Education Tour," where he spoke to students in over 65 High Schools and Colleges in the Greater LA area, DeLon stands for unity, positivity and human causes that plague our society.

PREVIOUSLY: MC Steinberg does his own version of "Paper Planes"