construction progress of Tobacco Warehouse (in 2013) 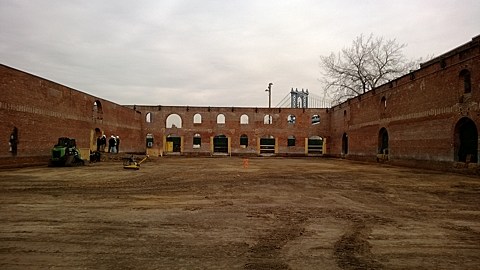 Brooklyn's long-running live performance group St. Ann's Warehouse, which "has commissioned, produced, and presented a unique and eclectic body of innovative theater and concert presentations that meet at the intersection of theater and rock and roll" for over three decades, has had various homes over the years, but it will now permanently be at the old Tobacco Warehouse in DUMBO. Brooklyn Paper describes the new location like this:

The new home of Saint Ann's Warehouse is under construction in the roof-less shell of the Tobacco Warehouse on Water Street in Dumbo and we got a sneak peek at the work that is underway. The $30-million construction job will place a shiny, steel-and-glass box within the confines of the old brick walls, leaving about an inch of space to preserve them. Honchos of the neighboring Brooklyn Bridge Park give the design rave reviews.

"It's a great design," said David Lowin, vice president of real estate for the Brooklyn Bridge Park Corporation, which controls the property. "It enhances the street-scape, but remains respectful to the historic building."

The structure, which from above will look like a rectangular box lodged in a trapezoid cubby, will house a theater and a community space and leaves a triangular sliver of open space within the old walls that will contain a public garden.

The new building's roof will extend about seven feet above the worn facade, enclosing the theater and a community space, with the top portion of the wall made of glass bricks to allow in light.

From the inside, the new playhouse at the corner of New Dock Street will still look something like a place to store dry goods, the architect said.

The new St. Ann's Warehouse will officially open on October 6 with a ribbon cutting at 10 AM. There are other opening celebrations planed for after that, including Brooklyn Youth Chorus & Kronos Quartet on 10/17 (noon-6 PM, free); Aoife O'Donovan, Sam Amidon and Thomas Bartlett on 10/18 (5 PM start, tickets); and more. The new season kicks off fully in November with a run of Shakespeare's Henry IV and continues into 2016. Check out the full upcoming schedule for more.