The very long list of Record Store Day exclusives has been revealed -- with "drops" on June 12 and July 17 -- and one of the many, many, many cool titles that stood out to us is a St. Vincent 7" featuring covers of Nine Inch Nails' "Piggy" and Metallica's "Sad But True," with her "Nirvana" bandmate Dave Grohl on drums for the NIN cover. That one comes out on July 17. STV previously released the NIN cover to Amazon Music subscribers in conjunction with the 2020 Rock & Roll Hall of Fame induction ceremony. As far as we can tell, she hasn't released the Metallica cover anywhere yet, but we do know that she and Metallica's Kirk Hammett are fans of each other.

St. Vincent, who also covered Tool recently, has been saying that she'll release her own album of heavy music one day. Maybe it'll sound something like "KROKODIL."

Meanwhile, her '70s-inspired Daddy's Home arrives May 14 via Loma Vista. She also just released a video for "The Melting of the Sun" off that album, and you can watch that below.

Also releasing a "Sad But True" cover on RSD is Mongolian folk metal band The Hu, who will pair their Metallica cover with their own "Wolf Totem" (ft. Jacoby Shaddix of Papa Roach) on a 7" picture disc. 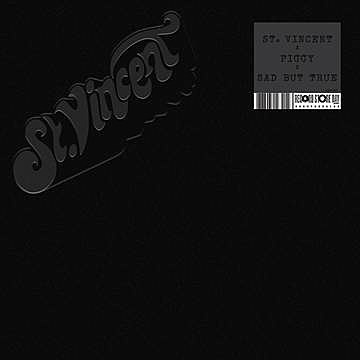