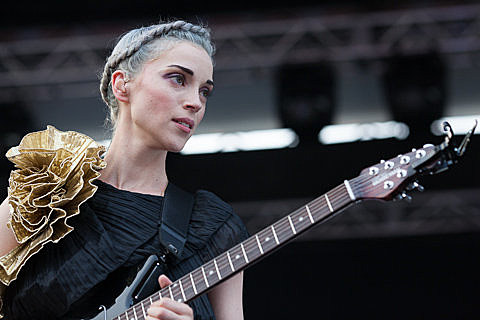 St. Vincent, who recently did a 'Live on Letterman' concert, will continue her talk show conquest by filling in for Fred Armisen next week as the bandleader of Late Night With Seth Meyers' 8G Band. While other musicians have sat in with the band before, Clark will be the first official guest bandleader on the show. She'll be on August 11 & 12.

Some might argue that Late Night with Seth Meyers' house band (featuring members of Girls Against Boys and Les Savy Fav) is more interesting than the bands they get to perform on the show (Rixton and Christina Perri were recent guests). Marnie Stern and Eleanor Friedberger regularly guest with the band, and J Mascis and Bangles singer Susanna Hoffs have played with them too. 8G Band bandleader Fred Armisen hasn't been on the show in over a month, off filming the new season of Portlandia. Clark and Armisen are pals, and she's appeared on the IFC sketch series a few times.

Before her stint on Late Night, St. Vincent plays a free Celebrate Brooklyn! show in Prospect Park on Saturday (8/9) with San Fermin (who play NYC again on their tour with Courtney Barnett).

Meanwhile, Fred is playing as part of a supergroup called Dead Men Walking, featuring Captain Sensible of The Damned, Slim Jim Phantom of The Stray Cats and Mike Peters of The Alarm. They play their first show ever at LA's The Troubador on September 14 with Chris Cheney of The Living End and The Wrights, and Duff McKagan of Guns N' Roses along for the ride.