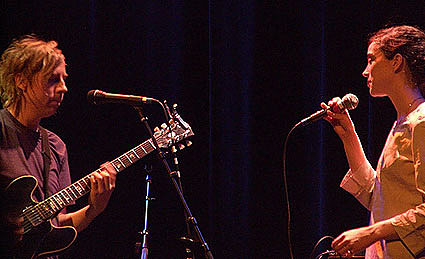 AC: 1984 was a pivotal year for us all. What were you doing and, more importantly, what were you wearing this year?
JV: Well I clearly remember wearing dolphin shorts and an "Ocean City, MD" tank top that summer. I was mowing lawns! And definitely stoned.

AC: In what ways has your relationship with food evolved as you've gotten older?
JV: Well , I worked for 5 years in at Chez Panisse in Berkeley. I got VERY spoiled. I eat very simple food now.

AC: You've made an open call for guest vocalists and bassists this tour. Explain how you are coping with this giant act of surrender.
JV: I started having a lot of concerns about the flow of the show, whether it would work or not. Now I've learned to embrace the anarchy...It's the best part of the show for me now.

AC: Rank these modern world leaders from most nefarious to slightly less nefarious: Stalin, Hitler, Pol Pot, G.W. Bush, Charles Taylor, President Bashir, (also, feel free include the many I've overlooked.)
JV: Annie!! I like your style.
Stalin
Hitler
GW Bush
Pol Pot
Charles Taylor
President Bashir
All these guys are fucked up, but some are boosted to the top by access to money, armaments, time of tenure, and strength of opposition. This is a VERY subjective list.

AC: True or False: You sometimes eat from the bowl of mixed nuts that has been sitting in the dressing room all day/night.
JV: True, that's not something I get hung up on. But if someone sneezes near me I will transform into Larry David.

AC: True or False: G.G. Allin had a profound effect on your music career.
JV: False, but anyone pushing limits is bound to free up everyone else in some way.

The tour is almost over - just a few days left: