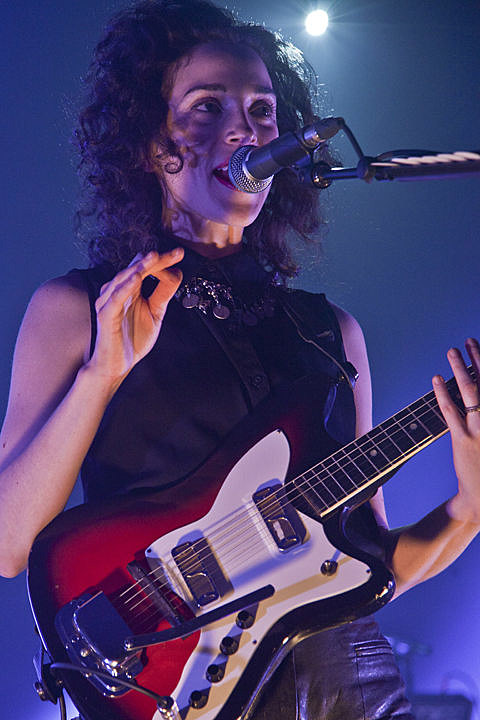 Annie Clark may not have released a St. Vincent record this year, but she did tour quite a bit in support of 2011's Strange Mercy. The one record Annie DID welcome this year was a collaboration with David Byrne, titled Love This Giant. She also toured a bunch in support of that album (maybe you saw our multi-part "On the Road with David Byrne & St. Vincent" series?). Today, the final day of 2012, Annie has offered up an "End of Year Summation" via her blog.

Read it all below...

Jetlag: Of the jetlag remedies, melatonin is the most terrifying on the psyche. Ambien is like melatonin's wild younger brother who drops LSD in 3rd period. I prefer the latter.

Stunts: Jump. People will catch you. But don't jump down 8 ft into the orchestra pit in heels. You will fracture your foot and end up getting wheeled through security at SFO.

Songs: Songs matter. Songs. Write songs. And when you get all PoMo* and decide that songs don't matter, write songs about that. You can't deconstruct it without constructing it first. *obnoxious way to say Post-Modern.

Apologies: Know that if I ran past you to get to soundcheck/show/bed and didn't stop to say hello, I still feel incredibly guilty about it.

Judge me: It's funny when women call other women "motherfucker".

Best meal of the year: Late February in Milan. The cheese. Oh, the cheese.

Entourages: Brief stint in Azealia Bank's entourage this summer in Madrid. Still not sure if she knows who I am.

Claim to fame: Tina Fey and I might have, at one time, shared the same internet stalker.

Thank you for everything this year, you guys.