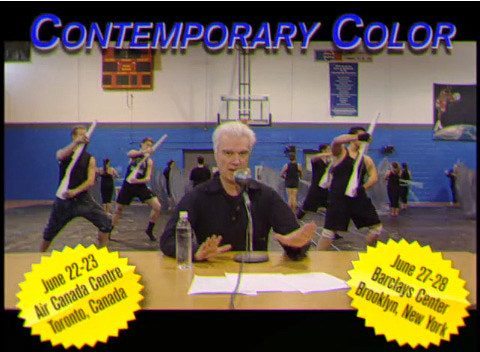 With the most recent run of David Byrne's Here Lies Love now in the past, David Byrne has just announced his next high-concept project which is on an even bigger scale. It's called Contemporary Color which happens at Barclays Center on June 27 & 28. A co-production with BAM (part of their 2015 Winter/Spring Season), it's a mix of live music and color guard (the synchronized flags will be familiar to anyone who's watched a high school or college marching band). The live music portion feature performances from Byrne, Nelly Furtado, How to Dress Well, Devonté Hynes, Kelis, Nico Muhly + Ira Glass, St. Vincent, and tUnE-yArDs, plus 10 color guard teams from the US and Canada.

Tickets are on artist presale now (password: DBCOLOR). Tickets are also on sale today (1/21) for Friends of BAM, with an AmEx presale starting Friday (1/23) at 10 AM. Tickets go on sale to the general public January 28 at 10 AM.

Here are more details from Byrne:

Some years ago, a Colorguard team wanted to use some music I'd written (from a theater piece I did with Robert Wilson, called The Forest) for one of their routines. I said,  "Fine, no charge... you are a high school team after all." But I asked that they send me documentation out of curiosity and for my archives. I eventually got a DVD of the whole World Championship competition. I watched, and was amazed and delighted to find myself in a new world that I didn't know existed.
What I was viewing is more properly referred to in that world as winterguard--as it takes place in the winter and spring--after fall football season, when the colorguard teams are more closely associated with drum lines and marching bands. Off season they do their own thing--still employing flags, rifles and sabers--but their routines are less about formation than about themes, emotion, concepts and visual spectacle. Over recent decades, the teams have evolved into something strange and wonderful; they've created a vibrant, innovative and original vernacular artform that is wildly popular across the whole North American continent, but is all but unknown in many of the big urban centers--like New York, where I live. Contemporary Color aims to remedy that situation.

I was stunned at what I was seeing, and being a musician I naturally wondered to myself, "What if these performances had live music? Really great live music! Wouldn't that be amazing? And wouldn't that lift it to another level?" (Besides being fun for the musicians too!). The competitions these teams engage in already fill arenas with their fans and supporters, so I thought to myself, "Let's take it from there!"

You can watch a video trailer about Contemporary Color below and learn more at its website. The extravaganza will make its world premiere the week before (June 22 & 23) at Toronto's Luminato Festival.

In related news, a lot more artists were announced for the David Byrne/Talking Heads tribute at Carnegie Hall.