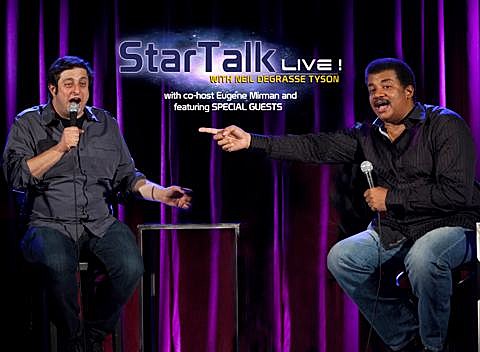 If there's one live comedy show in NYC that always startles me by how fast it sells out, it has to be StarTalk LIVE with Neil deGrasse Tyson and co-host Eugene Mirman. For those without Google, Neil deGrasse Tyson is a world renowned astrophysicist and Director of the Hayden Planetarium at the American Museum of Natural History. StarTalk is normally a radio show hosted by Neil and co-hosted by Eugene wherein they discuss science where it intersects with pop culture with incredible clarity, humor and excitement. Each week they are joined by an ever changing line-up of guest comedians, actors, scientists, and whoever else can bring something to the table. Actually, now that I think about it, I'm not surprised at all by how fast their live shows sell out (even before special guests are announced). The show kicks supreme ass and you will always leave the experience a much smarter person. Guaranteed. Previous live guests have included Alan Alda, Bill Nye the Science Guy, Sarah Silverman, Wyatt Cenac, Kristen Schaal, John Hodgman, and many many many other people of note.

Like a supernova, StarTalk LIVE! is exploding beyond the confines of their normal go-to venue The Bell House and will be heading to TOWN HALL on Wednesday February 27 for a BIG show with BIG special guests! Tickets are on sale now, and I cannot emphasize how mind-blowing one of the special guests is. I don't want to be all coy and dramatic, but one of the guests is literally one of the most important human beings in the history of mankind. No exaggeration. It's going to be one of the most fulfilling intellectual and comedic experiences of your life. And that's an Iron Clad Klaus Kinski Gold Standard Guarantee.

And don't forget that every Sunday evening Creaghead & Company take over Union Hall for an evening of awesome awesome awesome comedy. This Sunday (2/24) C&C welcome Seaton Smith, Streeter Seidell, Doogie Horner, Matt Graham, and Sean O'Connor. H. Jon Benjamin and Klaus All Time Fave Larry Murphy might even be there, but they're not sure. Doors are at 7:30pm, show's at 8:00pm, cover is $7.

In other comedy news, don't forget that Big Terrific celebrates 5 years of being one of the best free comedy show in NYC. Moving down the street from Cameo Gallery to the Music Hall of Williamsburg, the show will feature the three original hosts Jenny Slate, Gabe Liedman and Max Silvestri together again and lovelier than ever. The show is happening on Friday March 15 scads of special guests! Get your goddamned tickets this instant, you.