Someone get R2 out of that crate! 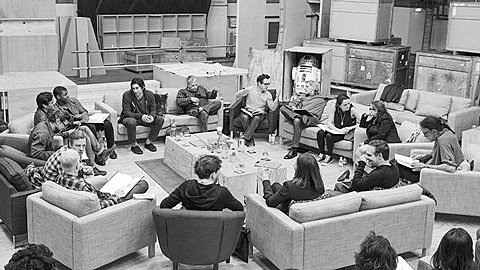 As you probably know, JJ Abrams is helming the new Star Wars sequel -- Episode VII, set 30 years after Return of the Jedi -- and there have been a lot of rumors as to who's going to be in it, old and new. StarWars.com just dropped a photon torpedo in the form of the above picture, which is a cast table read of the script. (The excitement crashed the site for a while.) Featured in the new film will be most of the original trilogy's cast, including Harrison Ford, Carrie Fisher, Mark Hamill, Peter Mayhew (Chewbacca), Anthony Daniels (C-3PO), and Kenny Baker (R2-D2).

As for new castmembers, it includes Oscar Isaac (Inside Llewyn Davis), Adam Driver (Adam on HBO's Girls), and John Boyega (Attack the Block), as well as veteran actor Max von Sydow, Domnhall Gleeson (Harry Potter and the Deathly Hallows), British actress Daisy Ridley, and professional green screen actor Andy Serkis (he was Gollum and King Kong). Filming starts this week at London's legendary Pinewood Studios (where much of the first three films were shot). The screenplay was co-written by Abrams and Lawrence Kasdan (who co-wrote The Empire Strikes Back and Return of the Jedi). It certainly sounds promising, right?

Star Wars: Episode VII, with a presumably longer title than that, will be out December 18, 2015.