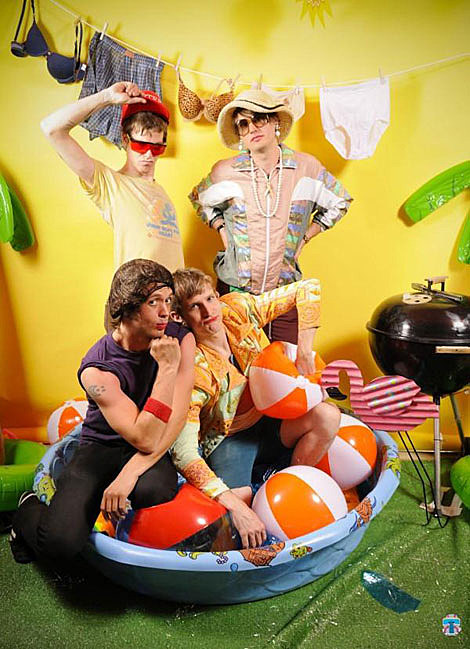 Portland, Oregon's Starfucker are in town playing two shows: tonight (9/22) at Bruar Falls and tomorrow (9/23) at Santo's Party House. It will likely be the last NYC shows they'll play under their current moniker, as the band are about to change it. What to? Like that falafel place on St. Marks / Bowery, they're running a contest to pick the new name:

We know our name sucks...so here is YOUR chance to help us pick a new one.

If your name is selected, you will get tons of cool shit... tons!

This is weird, we know... but its something we've been thinking about doing for a long time. And the truth is, we never thought we'd make it this far with Starfucker. It started as just a fun little house-show project, but now that we have the opportunity to do this full-time, travel and continue making music, we don't feel like the name makes sense anymore...

We never thought starfucker would make it as far as it has, and never had any expectations of success. At this point we need to be able to either put more into music, or just stop doing it so we can get 9-5 jobs to pay our rent. Right now we're in this bardo where we don't quite make a living off music but we put so much energy into it that we can't put any time into a real job either. We just need to get serious about one or the other. The name has been a problem for us in a lot of ways. We've missed out on opening slots with bands we really like, and we hope to tour europe soon where there is already a Starfucker. Someone booked us once thinking we were the European Starfucker. The list goes on and on...

The band are on tour with fellow Portland residents Deelay Ceelay, a "a collaboration between video artist/musician Chris Lael Larson and percussionist Delaney Kelly, fusing live instrumentation with synched projected visuals. Deelay Ceelay blur the divide between music, experimental film and performance while emphasizing the creation of a two-way exchange with audiences." You can download their "album" (20 minutes, four songs is an EP, guys) for free at their website.

DEELAY CEELAY VS THE BEACH BOYS from chris lael larson on Vimeo.