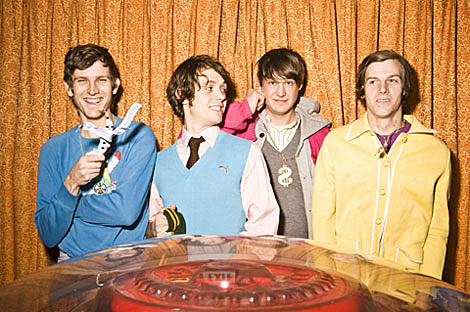 Less than a year since they released their self-titled debut, Portland Oregan's Starfucker are back with a new record, Jupiter, and a short U.S. tour that includes two stops in NYC this week: Mercury Lounge on Tuesday (4/21, TIX) and Union Hall on Wednesday (4/22, TIX). All dates through May 1 are with fellow Portlanders Guidance Counselor. Kuroma was also originally listed on these bills, but according to one of the promoters, "They dropped off a few weeks ago. No explanation."

You may have seen Starfucker last year during CMJ at the Brooklynvegan day party at Knitting Factory. (Or maybe not, they were on at noon.) At 26 minutes, Jupiter is technically a mini-LP and is more specifically aimed at the dancefloor than last year's debut. It's out May 5 and includes a not-bad cover of Cyndi Lauper's '80s classic, "Girls Just Wan't to Have Fun."

A bit confusingly, the band also just released a new music video for "German Love" which is on their first album, an MP3 of which is at the top of this post. You can watch the video and check out all Starfucker's U.S. tour dates below...